The next few weeks’ highlights at the Arts Centre in Bromsgrove. 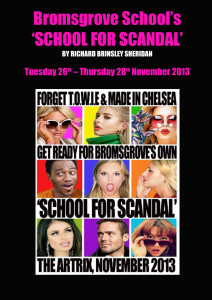 Forget the Only Way is Essex or Chelsea! For scandalous gossip, intrigues and giggles the only place to be in Bromsgrove is the Artrix on 26th-28th November when Bromsgrove School presents Sheridan’s popular satire School for Scandal. In this modern take on the Regency romp, the action is brought right up-to-date and set in the 21st Century with hilarious results. Last year’s school production of Cats was a sell-out so early booking is highly recommended.

Then fans of classical music have a treat in store at Artrix during the last weekend of November. On Friday 29th November Bromsgrove Concerts presents Ensemble Amarathos: A Midwinter’s Dream. Ensemble Amarathos was formed in 2006 and is made up of a group of young graduates from the Royal College of Music. Specialising in ‘early music’, they have recently done a broadcast for the Early Music Show on BBC Radio. They also gave a critically acclaimed concert at St Martin in the Fields in London. They will be playing a selection of music by Blow, Boccerini, Mealli, Handel, Hotteterre, Boesset, Lambers, Blavet, Torrelli, Froberger, Rebel & Rameau.

Redditch Orchestra, which is now in its 65th year, take to the stage on Saturday 30th November with a programme comprising Extracts from the Peer Gynt Suite by Grieg, Shostakovich’s Piano Concerto No 2 in F and Dvorak’s Symphony No 6 in D. The conductor will be Christopher Eldridge and the soloist will be Alastair Moseley.

Tickets are £17 (£3 Disabled, unemployed and students)

Redditch Orchestra are at Artrix on Saturday 30th November at 7.30 pm. Tickets are £10 (£9) and accompanied under 16s can gain free entry.