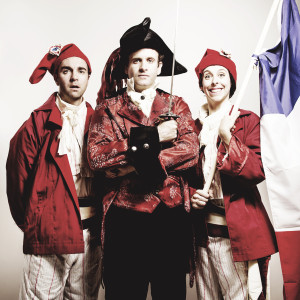 Audiences at Artrix will be treated to a fun-filled comedy adventure featuring swashbuckling sword fights and fake French accents on Monday 4th November.

I’m an Aristocrat Get Me Out of Here is presented by Gonzo Moose, renowned for its accessible blend of stage comedy combining improvisation, music and physical theatre. Set in Paris in 1792, this fast-paced evening features three actors playing over 20 roles in 75 minutes of fun and thrilling action.

Well-known for her distinctive use of the eight-string guitar, Lisbee graduated in 2009 from Goldsmiths College, University of London with a degree in Popular Music. With her first album ‘Firefly’ under her belt, she became the first unsigned singer-songwriter to play London’s O2, performing two shows to an audience of 30,000.

However, it wasn’t until Tony Robinson From BBC Radio 2 and 6 asked Lisbee for a copy of her debut single Red after hearing it on her My Space page that the ball really started rolling. Robinson’s support eventually led to Red being played on Radio 2 in January 2009. The subsequent release of Lisbee’s second album Girl on an Unmade Bed received a barrage of critical acclaim from the UK’s national and music press, and led to her supporting Joan Armatrading 73 date tour, including a sell-out performance at the Albert Hall.

2013 so far has seen Lisbee playing her own headline tour of the UK in March, touring with Seth Lakeman as well as playing festivals all over the UK. Her new album ‘Word Games’ is due for release on 4th November.

Supporting Lisbee is special guest Eleanor McEvoy, one of Ireland’s most accomplished contemporary singer/songwriters. McEvoy composed the song Only A Woman’s Heart, title track of A Woman’s Heart the best-selling Irish album in Irish history.