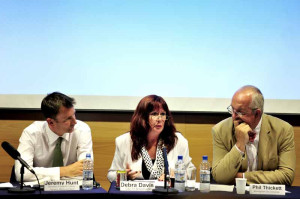 BLTV CEO Debra Davis has been overseeing the business, strategic partnerships, commercial development and corporate structure. She says,”Birmingham is the jewel in the crown of the new local TV network for the UK. London will have a massive metropolitan audience whilst here in the heart of the country we have the next largest catchment area, big enough to attract great new ideas and talent. Birmingham is the right size to deliver truly local programming that this great city and nearby communities have never really had from the regional TV services. We now have the business plan in good shape and the key task of planning a winning programme schedule can be given the green light”.

City TV will serve 1.2 million households within Birmingham, Walsall, Dudley and parts of Wolverhampton – an audience of 2.3 million potential viewers who see Birmingham as their hub for local news, sport, culture and entertainment. News, magazine features, lifestyle and entertainment shows with a local angle will be the core programming service on this new free-to-air channel, alongside many hours when wider factual and entertainment genres will be scheduled to recognise the demographics and diverse make-up of the greater Birmingham communities.

Whilst news and current affairs programming will operate under a News Editor, and core non-news programming under a head of programming, City TV founder, Alan Grindley will spearhead commissioning of non-core programme content, co-productions and acquisitions. This will be done under the banner of City TV Productions, a new operation formed and headed by Grindley that will function as a principal programme supplier to the channel. He said, “Our goal is to provide a broadcast platform for the excellent TV and film production talent from the Birmingham area. We already have a slate of formats in development and going forward priority will be given to programme ideas that have a local resonance whilst also having appeal to other domestic audiences in the UK as well as viewers around the world.

“We’re mindful that programme funding will need to recognise the new international landscape of entertainment and factual series that can be delivered via Video-on-Demand, tablets and mobiles. Globally there’s a hungry appetite for new quality content and the tag of ‘produced in Birmingham’ will deliver a feel-good factor for everyone who calls Birmingham home”.

City TV’s schedule will have an emphasis on locally produced material but in order that Birmingham’s new channel can deliver shows for a wide spectrum of tastes there will be slots when acquired series from different parts of the world will be aired; this will enable City TV Productions to barter programme formats with international distributors and producers and help Birmingham’s profile within the global TV and film community.

Alan Grindley is pleased to announce that Birmingham producer and broadcaster Mike Prince will be flying the flag for City TV Productions at MIPCOM, the international programme market in Cannes this October.  Grindley comments: “Mike joined Midland’s broadcaster ATV in the 60’s and stayed with the next ITV franchise holder Central until he co-founded the film and TV production and sales company Winchester Entertainment from its base in the Jewellery Quarter in the early nineties. Winchester co-produced many successful feature films and TV series and Mike fully understands the roller-coaster nature of the business and the need to always stay ahead of the curve in this fast moving sector. For the past ten years Mike has been working with overseas producers in a variety of creative and business roles. Mike’s loyalty to his native Birmingham and experience of the international TV market place is ideally suited to City TV’s ambitions and we’re delighted that he’s working with us on programme acquisitions as well as scouting for potential co-producers of new content. Mike’s role as Controller of Programmes for City TV Productions is effective as of October 1st 2013”.

Prince adds: “I’d be proud to be part of a team that finally launches a TV channel for Birmingham. I’ve seen how cities, province’s and regions around the world successfully support their own TV channels and having watched the exciting growth and changing face of Birmingham I welcome the opportunity to help tailor a service that complements the needs of our city. There will be dream stealers – I remember those who doubted the success of switching to colour TV, the reluctance of producers to accept the VHS market, those who said local radio and satellite TV wouldn’t work. Of course there’s always going to be bumps in the road and challenges ahead but Birmingham deserves local TV and I give City TV my support”.

City TV plan to go on air with their core news service in mid-2014 with a full launch of a complete programme schedule in the autumn, the traditional time of year when broadcasters showcase their new shows.