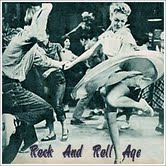 Rock ‘n’ Roll fans will be dusting off their blue suede shoes at Fletchers on York Road  when King’s Heath is shaking all over on Sunday 6th October.

50 years ago Gene Vincent played the former Ritz Ballroom in King’s Heath. Other international stars such as Jerry Lee Lewis and Bill Haley also played there as well as rising British stars Cliff Richard, Joe Brown and Johnny Kidd and.

Top local groups SwiftBeat, the 6-5 Specials and Mr Apollo will perform some of their favourite rock ‘n’ roll songs in a three hour session starting at 3 p.m. organised by King’s Heath Walk of Fame.

When Jerry Lee Lewis first performed at the Ritz his chauffeur had to be shown the way to King’s Heath from another Regan owned venue – the Plaza in Handsworth – by a fan travelling on his mate’s motor bike.  And when Gene Vincent played the Ritz on 21st June 1963 support band the Outlaws featured Ritchie Blackmore , later of Deep Purple and Rainbow fame.

Bill Haley is also known to have turned up announced at the Ritz to play an impromptu late night set, as did up and coming British rock ‘n’ roll acts including Joe Brown and a young Cliff Richard. When Cliff later played tennis with Wendy Bill of Maurice Robinson Sports on York Road he told her how he remembered playing the Ritz.

Local residents Bob Prew and Ken Whittaker, the men behind the King’s Heath’s Walk of Fame, who are organising the event said, “We want as many as people as possible to come along on 6 October  to continue to celebrate King’s Heath’s amazing musical heritage. We have lined up some great groups to ensure that King’s Heath is really shaking all over on the Sunday afternoon”.