Recognition for bringing about law change. 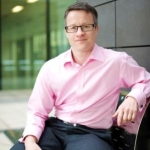 A pioneering West Midlands police officer has been recognised for their work to change the way transgendered people are treated by the police service.

For the past five years Detective Constable Al Smith (pictured) from the force’s Intelligence department has campaigned for changes to laws and police policies in order to ensure people who do not identify with the gender they were assigned with at birth are treated with dignity and respect.

Al was honoured at the 2013 National Diversity Awards in Leeds on Friday 20th September in front of a host of celebrities and invited dignitaries. The awards celebrated the achievements of grass-roots communities that tackle the issues in society, giving them recognition for their dedication and hard work.

The 41-year-old who is originally from Devon, said: “I am both honoured and humbled to be recognised in the 2013 National Diversity Awards Lesbian, Gay, Bisexual and Trans Positive Role Model category. While I recognise myself as someone who is positive about being LGBT, I’m not sure I’d recognise myself as a ‘role model’ who’s different from any other LGBT person who is out at work and showing quiet, authentic leadership by being true to who we are.”

In addition to day-to-day police duties, DC Smith has helped establish a unique trans hate crime group. Members of transgender communities in the West Midlands meet and scrutinise the decisions of police and the Crown Prosecution Service and hold them to account over the way transphobic hate crimes are investigated.

The delivery of training courses, mentoring and public speaking at national conferences are all par for the course for the detective, whosegreatest achievement has been changing the law. Thanks to DC Smith’s efforts, the Police and Criminal Evidence Act 1984 (PACE) codes of practice now ensure transgendered detainees are treated as the gender they identify with rather than the gender they were born into.

Changes have also been made to the way in which criminal record checks are conducted by the Disclosure and Barring Service to prevent the inadvertent release of gender change information. Similarly, the ways in which gender changes are recorded on the Police National Computer have also been amended. Internal police policies have also been changed to ensure equality and provide greater protection to transgender officers and staff.

“Working in partnership with colleagues from West Midlands Police’s LGBT Network and others across the police service through the National Trans Police Association, I hope to have removed any sense of isolation and to have helped shape a workplace culture in which all staff are free to be themselves. Who we really are is important to what we do and how we do it,” said DC Smith.

Assistant Chief Constable Marcus Beale said: “I’m immensely proud to have DC Smith work for West Midlands Police and so pleased this hard work and dedication has been publicly recognised.

“The efforts of this officer have ensured that the rights of  this relatively small community are not overlooked. Within the police family, this means officers and staff being respected and supported so that they are enabled to do a great job. Externally, this means we are better placed to provide these communities with a relevant and effective policing service.

“The changes which have been brought about are not only benefitting people here in the West Midlands but also further afield. DC Smith is a true pioneer and a wonderful role model.”

Deputy Police and Crime Commissioner for the West Midlands, Yvonne Mosquito, added: “I consider it to be a privilege to congratulate DC Al Smith on the phenomenal achievement raising transgender issues locally and nationally. He has changed national legislation for so many people who have been voiceless in this country for a long time.”

The detective pipped another West Midlands police officer to the finals of the   National Diversity Awards. PC Gary Stack, from Birmingham Central police station, was nominated for the same award for his work in tackling homophobic and transphobic hate crime.