A large crowd greeted education activist Malala Yousafzai this morning as she officially opened the Library of Birmingham. 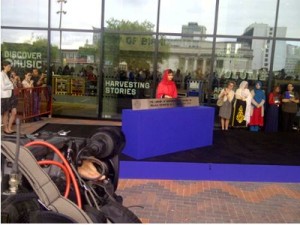 The 16 year old, who became known throughout the world for her courage in defying the Taliban in her native Pakistan, delighted onlookers as she welcomed what she called her “fellow Brummies” to the new £188m development. In a speech that drew cheers from the 1,000-strong crowd, she described books as weapons that can defeat terrorism and called for renewed efforts to educate and empower children in the third world. Now studying at Edgbaston High School for Girls, she added, “Birmingham is very special for me because it is here that I found myself alive, seven days after I was shot.”

Earlier, there had been speeches from dignitaries including Culture Minister Ed Vaizey, who praised the spirit of all-party co-operation that led to the project. Architect Francine Houben spoke encouragingly of what she called a new Peoples Palace and hoped it would be treated with respect. The newest and youngest member of the library, year old Teddy Hall, was also presented with his card prior to the opening ceremony.

Later, there were lengthy queues to enter the library, where visitors were greeted by the Lord Mayor Cllr Mike Leddy, who described the opening as the “highlight” of his mayoral year so far, adding, “This is a fantastic building, a true peoples library, as shown by the numbers who have been queuing all morning to visit the many, many world-class collections housed here.” 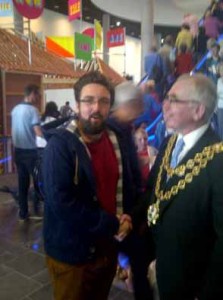 The Lord Mayor greets one of the first visitors to the Library of Birmingham.

Cllr Leddy’s words were echoed by the Bishop of Birmingham, David Urquhart, who praised this “breathtakingly wonderful centre for learning and community life.”

Also present outside the library were Birmingham’s John Bull, Ray Egan, whose regular presence at city events this time appeared to contain a sideswipe at the Prince of Wales as his placard bore the message “What will Charley think of this?” and protestors campaigning against library cuts.