Sir Albert Bore will be absent from today’s official opening, but as the media and Birmingham’s great and good fawn over the city’s new main library, Steve Beauchampé offers some facts (and opinions) that may not receive much of an airing elsewhere today. 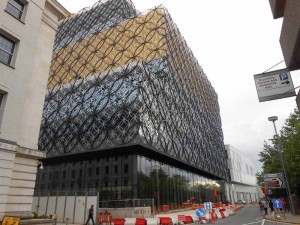 The initial cost of building the Library of Birmingham is £188.6m and has been paid for entirely through Prudential Borrowing. Birmingham City Council originally planned to meet much of this cost by selling land at Paradise Circus. It failed to raise a penny through this method, the result of which is that once interest charges are applied (over a 40-year period), the final cost is expected to reach up to £590m (Paul Dale, The Birmingham Post, December 2009). At some future point, that sum has to be met by the city, perhaps through service cuts, perhaps by increasing Council Tax. In December 2009 then finance chief Councillor Randall Brew told the Birmingham Post that the city might be overstretching itself by racking up such expensive interest payments.

This expenditure comes at a time when Birmingham City Council is in the midst of substantial and increasing cutbacks, not least to leisure centres and its services for the elderly and infirm.

An unknown quantity of books and other documents have been disposed of, both in the lead up to, and during, the move from the old library to the new building. Some of these were duplicate copies, but I understand that others were not and also that there is no inventory of exactly what has been disposed of. These disposals were considered necessary as storage space at the new facility is smaller than was initially envisaged, and there is no room on what is a very hemmed in site to expand (and the planned size of the building was reduced from eleven storeys to ten).

During the last few years a considerable number of experienced, specialist staff have left Library Services employment without being adequately replaced. For the most part, the Library of Birmingham’s often vaguely named departments (e.g. Knowledge, Discovery, Book Browse – along with the Business Department which will include such sections as Brainbox and Soundbox!) will be staffed, not by qualified librarians with a specialist and often long-standing knowledge of particular subjects, but partly by ‘floorwalkers’, liable to be assigned work across a range of departments from one day to the next.

As identified by Graham Young in the Birmingham Mail (August 24th 2013), the Council has wholly failed to integrate the Civic Gardens in Cambridge Street (immediately to the rear of the new library) into the development. A real missed opportunity.

The new Library of Birmingham needs to generate an income of £3m per annum to meet its operational costs. So expect many services that were previously free to now be charged for, and many of those that were already charged for to cost more. Thus, what for decades has been run with a public service ethic will inevitably become more commercially focused. Similarly, although proposals to outsource the running of the library to the private sector are currently on hold, it seems all but inevitable, given the direction of travel as regards the running of public services in Britain, that the day will soon come when the likes of Capita and G4S are tendering to manage the Library of Birmingham and hoping to make a tidy profit from so doing.

Subjective of course, but in this writer’s opinion, externally at least (I have yet to see the inside), the new Library of Birmingham is bereft of the integrity one should expect of key civic building, a decorative box utterly out of place and scale in its location adjacent to Baskerville House and yards from the Hall of Memory. Having been shoehorned into the limited available space it is thus largely hidden from adequate long distance views, when retaining a Paradise Circus location (rebuilt or refurbished) would surely have provided a potentially more imposing and impressive setting. When the library’s design was first unveiled, former Cabinet Member for Leisure, Sport and Culture, Martin Mullaney likened its appearance to “three mattresses with a roll of duct tape stuck on the top”. An unerringly accurate description. One may accept that the new library is more eye-catching when artificially illuminated, but that is perhaps because in the dark you can’t really see the actual building. 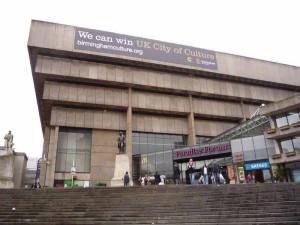 Given that Birmingham City Council had deliberately allowed the old central library to run down and fall into disrepair, it is no surprise that the many find the sparkling new edifice impressive in comparison. At an initial £188.6m, and with the council pulling out all of the stops, it should look good on its first day of operation. Yet those now cooing should perhaps wait to discover how successfully or otherwise the building functions as the city’s main library on a day-to-day basis before they pass meaningful judgement.

11 thoughts on “Six years late and way over budget”