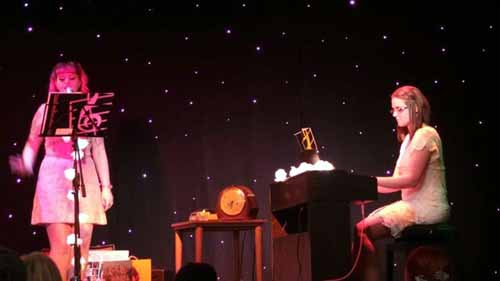 Their love of 1960s pop music has just brought two Coventry University students their music degrees. And it will now also bring them to King’s Heath on Sunday 4 August to perform  at a special concert called “Girls on Top” to celebrate the great female pop stars of the 1960s.

21 year old vocalist Melissa Gill and 24 year old pianist Hannah Maydwell formed their duo “That Sixties Vibe” as part of  a final year project for their Music Composition degree . They said “We recently organised a Charity Night and a member of the audience told us they had read about young up and coming musicians being needed for the concert in King’s Heath. We thought it would be a fantastic opportunity for us and we are very excited that we have been given the opportunity to perform at such a great event”.

King’s Heath Walk of Fame Organisers Bob Prew and Ken Whittaker said:  “We now have a terrific line-up of young talent for our show. Present day female stars like Adele and Duffy owe a great deal to the trailblazing role played in the 1960s by female stars such as Dusty Springfield and Sandie Shaw. We are thrilled that  Melissa and Hannah and a whole new generation want to continue to celebrate the musical legacy of the 1960s”.

Starting at 4 p.m. the “Girls On Top” show will take place at Fletchers in King’s Heath as part of a series of sessions to commemorate the heritage of the Ritz Ballroom where many of the periods pop legends performed before they were famous; including Dusty Springfield, Sandie Shaw, Helen Shapiro and Cilla Black.

Advance tickets are available for just £2.50 from the Kitchen Garden Cafe on York Road or £2.75 from www.wegottickets.com/event/224507.  Any remaining tickets will cost £3 on the day.