Nature lovers are being asked to check their gardens for tigers in a bid to help conservationists studying the effects of climate change on moth distribution. 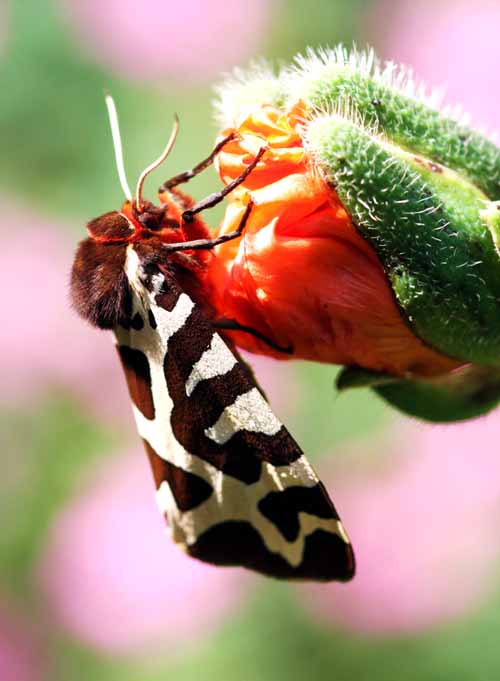 Tiger moths are amongst the most colourful of the UK’s 2,500-plus moth species, but some members of the tiger family have experienced dramatic fluctuations in distribution and population over the last 40 years.

Butterfly Conservation and Lepidoptera journal Atropos are asking the public to send in records of their tiger sightings during Moth Night 2013 – the annual celebration of moths and moth recording, to help gather vital information about this charismatic family.

Two species in particular, the Garden Tiger and the Jersey Tiger, have experienced widely differing fortunes.

The Garden Tiger, known for its distinctive ‘woolly bear’ caterpillar, was once widespread across much of the UK and was commonly found in gardens. But this brightly coloured species has suffered a severe population fall of 92% over the last 40 years.

It is thought that climate change in the form of warmer, wetter winters has reduced the survival of the Garden Tiger’s caterpillar stage with the adult population decreasing as a result. The warmer, wetter weather may have increased the incidence of diseases which would not normally be present in colder, drier conditions.

But climate change has benefitted some species. The beautifully patterned Jersey Tiger, first recorded as an immigrant in Devon in 1880, has experienced a dramatic upsurge.

The Jersey Tiger remained confined to an isolated pocket of Devon but in the last 20 years began to dramatically spread across southern England with regular sightings now recorded in Dorset, Hampshire, Sussex, Kent and as far north as Hertfordshire.

Most surprisingly, this stunning day-flying moth has become common in London including gardens right in the heart of the city.

The Ruby Tiger is another member of the family that will be present in our gardens and countryside this August. Numbers of this ruby-red moth have soared by 296% over the last 40 years.

Butterfly Conservation Head of Surveys Richard Fox said: “Moths are a greatly under-appreciated part of UK wildlife, but these tiger moths rival any butterfly for beauty and some even fly in the day.

“But climate change and other factors are creating great upheavals among our moths and other wildlife. The Garden Tiger is in precipitous decline, especially in the south, while populations appear to be holding up further north.

“Other species such as the Jersey Tiger are expanding their distributions, colonising new areas of Britain. Up-to-date information is essential to understand these changes better so we need the public’s help to track down these tigers for Moth Night 2013.”

Atropos editor Mark Tunmore said: “Moth Night comes at a particularly exciting time this year following a long period of warm weather in July. After a very slow start to the year the numbers of moths flying has soared and we are receiving lots of reports of unusual resident species and migrants from overseas.

“If the weather helps us out over the Moth Night period then participants can look forward to some bumper catches and hopefully a few surprises. Mothing is great fun and easy to join in with so we hope that as many people as possible will get out into the countryside, go to public events and keep an eye on the kitchen window.”

Moth Night 2013 runs from 8-10 August and will include a series of daytime searches and night-time recording across the UK.