Richard Lutz wanders through the dying embers of Lockdown Land. 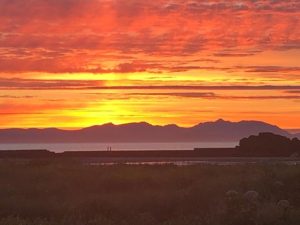 Mileage: Good chance it’s been once around the clock

To view: On the Strathcarrick beachfront where it’s been sitting for the last three months.

Price: Name it and it’s yours

Everyone in the village knows about the black Mondeo, abandoned with the grass growing up to the wheelbase as the summer emerges. It’s one of two cars that are regular points of navigation as I deliver food and messages to those that can’t leave their Strathcarrick homes during Scottish lockdown.

The other car is a fairly snappy white Seat. It’s not abandoned. As a matter of fact, it’s fully functioning with a driver. Almost every morning, it’s parked on the shore looking out at the ever-changing sea. Inside is a man on his mobile and you can hear both sides of the conversation because it’s on speakerphone. And it’s on max audio, too.

He sits behind the wheel and amiably gabbles on to the unseen voice. Nothing of import. But the whole world hears about friends and family, about the virus, about football and gossip. About food.

Today the car chat is all about pubs. They’ll open next week down south in England. But not in Scotland. It makes for instant debate.

At John V’s house, I drop off bread, the paper, milk (blue topped), six eggs, a dozen Ayrshire potatoes that go by the nickname GEGs. That stands for Girvan Early Growers and that indicates they were picked from the local fields. John, known as Jake, has eye problems after a life spent buying, selling and leasing huge agricultural machines that lumber up and down the coastal roads and keep food on the table. He’s not happy with the eggs I bring. They’re called Tartan Tasters and on the box is a pair of chickens in kilts playing bagpipes. The logo is “Only the shell can tell”.

“Just tell Paul to give me the brown eggs from McLaughlins.” Why, I ask, because I’m kind of partial to kilted chickens. “These Tasters”,  he points to The Tasters, “have no taste. I need yellow yolks.”

I return to Paul’s Harbour Shop  to tell him about The Tasters, the yellow yolks and the shell that can’t tell. But before I go in, I’m sidetracked by a guy with a six foot python wrapped around his neck. He’s wearing an Ipswich Town strip. I ask Paul about it. Not the jersey but the snake. It’s not a normal sight in Strathcarrick. “That’s Ian, Mary’s nephew,” Paul explains, as if that explains anything.

“He loves his snakes.” But, he adds, finding a box of McLaughlin grade A eggs: “Just don’t get Ian started on his tarantulas.”

I promise that I won’t. Pythons, I can handle. But not tarantulas. They give me the creeps. And I have enough problems. Especially with this lockdown.

3 thoughts on “Covid chronicles: The case of the kilted chickens”