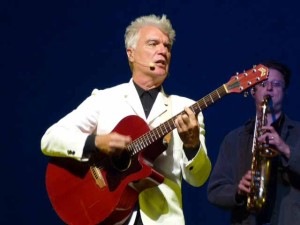 Two things are a given for me as regards David Byrne; firstly, his musical projects are always worth investing time in, and secondly, my mood will be better after hearing his music than whatever it was beforehand.

Byrne’s latest venture is a collaboration with former Polyphonic Spree guitarist and fellow New York resident Annie Erin Clark (performing under the name St. Vincent), a project that grew from their working on a couple of song ideas in 2009 to the recording and release in 2012 of an album, Love This Giant. The pair assembled an 8-piece marching brass band (the Love This Giant brass band), plus a drummer and keyboardist, to accompany their vocals and guitars (Byrne plays rhythm, Clark lead). The resulting arrangements are open and bright, creating an optimistic feeling even when the lyrics sometimes aren’t. It’s testimony both to Clark’s talent and Byrne’s maturity, artistic sensibilities and awareness, that the songs are truly collaborative, both in their writing and execution. Lead vocals are shared, swapped around even within songs, while at no point is Byrne overbearing or unnecessarily dominating, despite his greater experience and revered status. 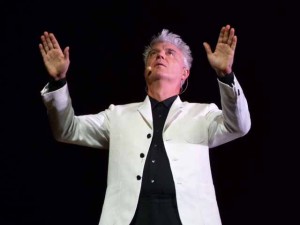 It’s a similarly flexible approach in live performance where Byrne, in white jacket (initially), black shirt, black trousers and white shoes, utilises a head microphone, affording him the ability to play his guitar or deliver vocals from almost any part of the stage. When he’s not playing, he’s dancing robotically or looking on admiringly at his charges. Clark (attired in a blue dress) sings chiefly from a fixed microphone, but also travels widely on occasion, with both main protagonists sometimes stepping aside to permit the other musicians the prominence their input deserves. The whole set up is beautifully fluid; aside from drums and keyboards – whose positions are fixed – the remaining eight musicians variously circulate the stage, assemble in small groups and weave in and out of the two stars. Their instrumentation includes trumpet, trombone, clarinet, French horn, saxophones, sousaphone, flute and flugelhorn.

Naturally much of tonight’s material is from Love This Giant with Who, I Should Watch TV, Save Me and Outside of Space and Time particularly outstanding, helped in no small measure by a sound balance that is never less than spot-on and the fact that both Byrne and Clark are strong vocalists, delivering their words with clarity and distinctiveness.

Yet while showcasing the new material is the main reason for the tour, other treats from Byrne’s back catalogue are offered up. Early on comes the reflective This Must Be The Place, perhaps as close to a ballad as Talking Heads ever came. A tumultuous version of Wild, Wild Life, from the album and film True Stories and which Byrne had never performed live until a few months ago, is followed (via several Love This Giant songs) by Like Humans Do from his magnificent (and largely overlooked) 2001 album Look Into The Eyeball. 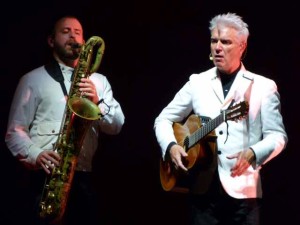 Two further Talking Heads songs feature, one each during the two encores. First up is Burning Down The House, whose familiar funk-soaked grooves give way (to good effect) to the brassier arrangement of the Love This Giant band and which brings the audience to their feet. After Clark’s searing vocal rendition of The Party the show closes with Road To Nowhere, as joyous and infectious as it always is (and always will be).

And into the night we all go; our love for David Byrne reaffirmed, our minds broadened by the talent that is Annie Clark, aka St. Vincent.
Photos by Muna Masood