Hoards of film fans have packed out Brindleyplace this week to enjoy a range of family-friendly movies during this year’s Outdoor Film Festival. 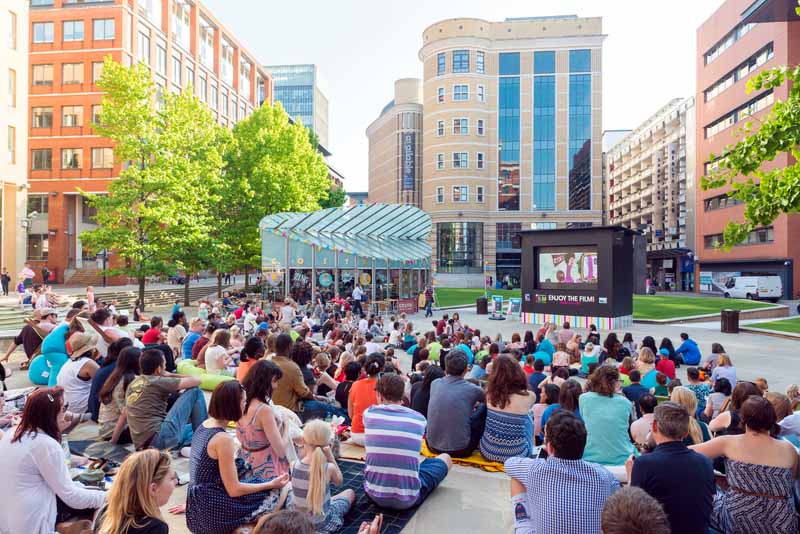 Surpassing all expectations, Brindleyplace attracted nearly 2,000 people to the Film Festival in the first few days alone and is hoping to double this figure before the week–long event is over.

There are still five films to be shown as part of the festival, with Mamma Mia! showing tonight at 6pm (Friday 12 July) and Shrek and Mary Poppins being screened on Saturday (13 July) at 11am and 2pm respectively. The Brindleyplace Outdoor Film Festival will conclude on Sunday (14 July) with Madagascar at 11am and Wizard of Oz at 2pm.

Kate Fittall, destination marketing manager at Brindleyplace said: “This year’s Brindleyplace Outdoor Film Festival has been a resounding success and we’ve had such great feedback from both tenants and the general public that I’m sure the weekend’s films will attract similarly impressive crowds.

“Last night’s showing of The Goonies attracted about 500 people on its own, with many tucking into the fantastic takeaway offerings available. Following on from the success of our first musical, Grease, on Monday, we’re expecting Mamma Mia to be incredibly popular with viewers singing and dancing along to the summery songs – just like they were earlier in the week!”

The Brindleyplace Outdoor Film Festival is taking place in Central Square and is free for everyone to attend. Brindleyplace is providing beanbags and blankets and is giving away free popcorn to those people watching the films – all on a first come first served basis. All films are suitable for family viewing.

A number of the restaurants at Brindleyplace – Bank, Chilacas, Gourmet Burger Kitchen and Piccolino –are selling takeaway food during the festival.