Visit Birmingham has partnered with London Midland to launch a new tourism campaign promoting the city’s food scene, as part of its ongoing strategy to position Birmingham as an international leader in cuisine. 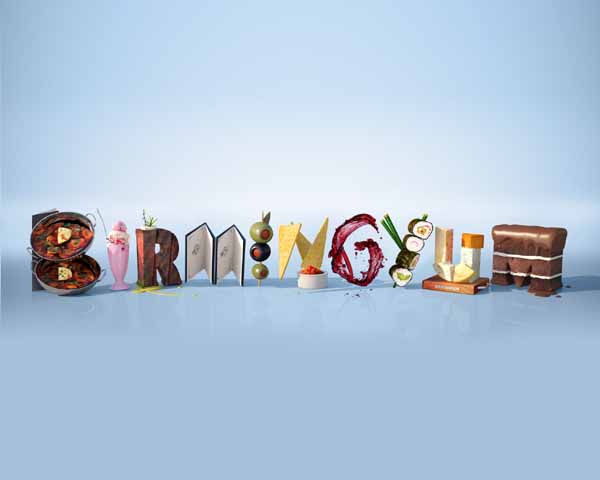 The ‘Birmingyum’ integrated marketing campaign hopes to build on the city’s growing culinary profile with a range of national advertising, door drops, creative PR, digital and social media activity. The promotional drive, which starts by shining the spotlight on a jam-packed summer of food events in the city, will showcase Birmingham’s diverse dining scene – from local producers and farmers’ markets to its world renowned restaurants and independent eateries. Striking advertisements, featuring the word ‘Birmingyum’ made out of food, will feature in titles including BBC Good Food and The Guardian.

Following work to boost its foodie profile in recent years, the city’s culinary scene has won plaudits from influential titles such as The New York Times and BBC Olive Magazine. As a result, nearly 60% of visitors travel to Birmingham for the acclaimed food and drink scene.

Ian Taylor, Commercial Director for Visit Birmingham, the city’s leisure tourism programme, said: “The ‘Birmingyum’ campaign looks to further cement our reputation as a leading gastronomic centre by showcasing the vast spectrum of food available in the city, from Michelin starred restaurants to independent eateries, street food and artisan producers.

“The city has recently experienced an explosion in foodie events. Whether it’s a new food fair, pop up restaurant or dining experience, Birmingham continues to push the boundaries of culinary creativity, attracting new visitors keen to sample our unique gastronomy offer.”

As part of the campaign, a new ‘Birmingyum’ micro-site, www.visitbirmingham.com/summer, highlights the breadth and depth of the city’s gastronomy. Designed as a tool to help visitors plan a food-filled trip to Birmingham, the site includes suggestions of what to eat, buy, see and do. It also features a range of online infomercials of Birmingham’s best chefs at work, recipes, cooking tips, event listings and promotional restaurant offers.

The micro-site includes a detailed roundup of the foodie fun taking place across the city region, from food fairs and festivals to ‘best of British’ and beer bashes. Highlights include the hotly anticipated Birmingham Chilli Festival in Brindleyplace on 19-20 July, Warwick Bar’s Summer Fete on 27 July, a free event for the family at Digbeth’s canal side, street food favourite Brum Yum Yum and A Dram Fine Summer, featuring a range of whisky themed events from The Birmingham Whisky Club.

A range of ‘food heroes’ – the innovative chefs and entrepreneurs at the forefront of the city’s culinary scene – are also profiled as part of the campaign across online and PR activity. These include Jack Brabant, founder of weekly street food fair Digbeth Dining Club, Tom Baker of Loaf Cookery School and Jayne Bradley, director of Edible Eastside and the soon-to-launch Kitchen Cookery School in Harborne.

Glynn Purnell, Head Chef of Purnell’s, said: “Birmingham is fast becoming recognised as a leader in cuisine – the outstanding food and drink offering in the city is something to be extremely proud of.

“We have worked with Marketing Birmingham to promote the city’s culinary scene for many years. The new ‘Birmingyum’ campaign is a great platform to promote the diversity of food available here – from fine dining restaurants through to our burgeoning independents and the street food revolution taking hold of the city.”

London Midland’s Head of Marketing, David Whitley commented: “The impressive rise of fantastic cuisine the city has to offer its visitors has been phenomenal; placing Birmingham at the centre of the food revolution. London Midland are very proud to serve the city with direct trains bringing customers right into the heart of all the action where they can certainly satisfy their appetite!”

Visitors, tourists and local supporters are being urged to get involved with the campaign on social media, sharing their food passions and culinary experiences with the hashtag #Birmingyum. The campaign will also see Visit Birmingham launch an exciting new foodie app in August, designed to help visitors uncover Birmingham’s many culinary gems while in the city.

For further information on ‘Birmingyum’ and the diverse range of foodie events taking place in Birmingham and the wider region visit www.visitbirmingham.com/summer.