It’s time for Alistair Griffin to sing for his supper, as the singer-songwriter embarks on a UK tour with a difference. 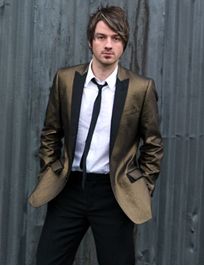 In support of The Trussell Trust’s foodbank network, Alistair is generously giving the profits from the tour to the charity, but he’ll also be collecting food as well as fans as he travels around the country!

He’s asking all those who buy a ticket to bring something from their kitchen cupboard to help foodbanks provide emergency food to more people and families in crisis in the UK.

From 15th – 22nd August the tour will be taking in pubs, churches and even tea houses, and  coincides with Alistair’s new single The One – a duet with Leddra Chapman and featuring Grimethorpe Colliery Band.

Working closely with The Trussell Trust, and with Fuller’s Brewery who have generously donated their venues and staff for free, the tour comes in response to the marked increase in people visiting foodbanks in the UK.

Griffin comments: “Times are hard and for some people that means a daily struggle for the things that a lot of us take for granted. I designed this tour to help raise awareness and directly help people in need.” Alistair is putting community firmly at the heart of his current musical projects, with his upcoming single featuring the world -renowned Grimethorpe Colliery Band as he helps them battle for survival.

So first you buy your tickets, and then you simply buy a tin of tomatoes, or a can of soup, or a tin of tuna and just bring them along with you on the night- not only will you enjoy a great night of music, but you’ll also be doing a great thing and helping Alistair to help people in your local area by supporting The Foodbank Tour.

Tickets available for Alistair’s performance at the Old Joint Stock Theatre are available to book now
Online on the OJST website
Box office: 0121 200 0946

For more details on The Trussell trust, visit their website here.