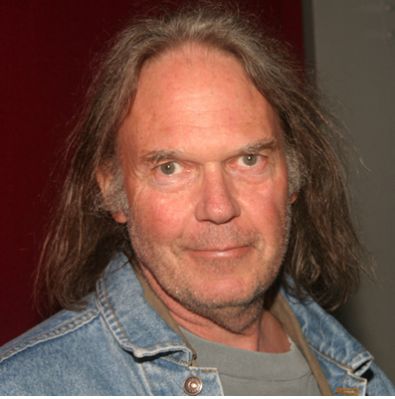 As the years flash by, rock fans of a certain age – of which I suppose I’m one – hanker for ‘the last chance’ to see their heroes. Mind you, I should know better as I’ve watched at least two Who ‘farewell/final’ concerts but, undeterred, I booked up months ago to ensure I took the opportunity to see a 67 year old Neil Young and his magnificent backing band Crazy Horse.

Income earning issues meant that their appearance was at the less than atmospheric NIA together with the spectre of paying the drink prices (£4 a bottle) that accompanies this sort of venue.

On arrival, my daughter Lora and her friend Hannah (also fans) decided to head for the authorised T-Shirt selling outlet and bizarrely the exorbitant £25 purchases were ‘gift wrapped’ in One Direction carrier bags…taking the piss or what? On that note, this was one of the few times that I’ve had to queue up to go to the gents, no doubt caused by the age and sex profile of the audience, and the time delay inevitably caused by certain medical conditions.

Next steps were the unushered climb to our seats. I say “unushered” because the one usherette in sight merely waved in the general direction of an almost mist shrouded back row. Thankfully my lamentable lack of night vision was augmented by my daughter and friend who made sure that I safely made my seat. Although, as they tellingly remarked, what did I expect -choc ices?

By the time we sat down, the support band were on and very good they were, although I never caught their name. Neil Young and Crazy Horse hove into view around 8.45 with Neil in his black-brimmed hat cutting a figure that was a cross between Mick Jagger and George Melly.  However, his energy was boundless and the guitar chemistry with Crazy Horse made for an outstanding run through their repertoire with a few solos that would have done justice to Hendrix himself. Young’s haunting voice has lost none of its resonance and his rendition of Heart of Gold tugged more than a few heartstrings.

After a couple of encores a marathon session finished after 11pm, certainly past hot cocoa time for the majority of the appreciative audience. Certainly, it was an inspiration to those of us who are sixty plus and are not yet resigned to a life of pipe and slippers. In fact my only complaint, if this doesn’t seem churlish, was that we were never treated to my personal favourite, Rocking in the Free World. But, in fairness, ‘rocking’ was something that this gig never lacked.