This summer Birmingham’s Southside district is getting in touch with its inner Chi with a programme of uplifting Tai Chi classes in the Arcadian. 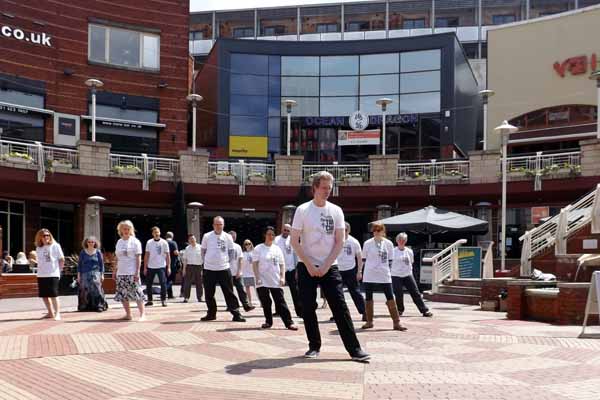 Southside has teamed up with West Midlands group Tai Chi Stuff to offer free classes to visitors to the district from now until Monday 5 August. Classes, which started on 3 June, will be held on a Monday – Friday 12:45pm – 1:30pm in the centre of the Arcadian for people of all ages and abilities to enjoy.

Sessions will be headed up by Tai Chi Stuff Chief Instructor Steve Jones and training partner Keith Leonard, who studied with master Ding Teah Chean, acknowledged as one of the best instructors in the country. Tai Chi is a martial art that originated in China and is now practised by more than 20% of the world’s population.

Tai Chi Stuff, which instructs Tai Chi classes throughout the West Midlands, will offer a programme of traditional Tai Chi which stimulates the body and mind. Tai Chi is used every day by young and old alike as a means of maintaining health, healing injuries and self-defence. Characterised by its slow movements and graceful flow, Tai Chi provides a complimentary balance to the modern western world and its hectic lifestyle.

Steve Jones, Tai Chi Chief Instructor said: “Birmingham has a rich tradition of multi-cultural roots which we should encourage, and introducing Tai Chi classes to the city’s most vibrant district is a step forward. The art of Tai Chi appeals to people of all ages and abilities – people can just turn up and join in at any time, wearing whatever they are most comfortable in. It is great to see people celebrating something that people have been doing for hundreds of years.”

Julia Chance, Southside BID Manager, added: “We’re thrilled to be working with Tai Chi Stuff and it’s exciting to be able to offer something new and different to our visitors. The great thing about these classes is that they operate on a revolving basis, meaning anyone can join at any time and their central location in the Arcadian makes them accessible to all. Tai Chi Stuff is a fantastic asset to Southside and we’re looking forward to seeing how it takes off this summer.”

To find out more about Southside visit www.enjoysouthside.co.uk