Boys and girls from Solihull School enjoyed a date with Royalty when they were invited to the official opening of the new Marie Curie Hospice in Solihull. 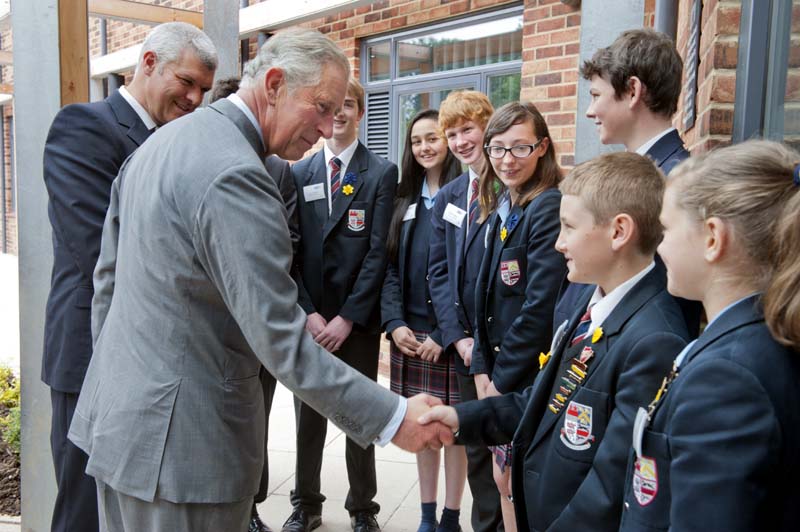 They were welcomed by His Royal Highness the Prince of Wales who congratulated them on their efforts and those of their fellow pupils in raising more than £5,000 for the Marie Curie Big Build Appeal.

As Patron of Marie Curie Cancer Care, Prince Charles officially opened the new £20 million state-of-the- art hospice in Marsh Lane, the construction of which was made by possible by the successful £7 million public appeal.

Eight Solihull School pupils, including the Heads of the Junior and Lower Schools and those with family members using the hospice’s services, attended the event.

Pupils throughout the independent school on Warwick Road, close to the previous smaller Marie Curie site, held a series of fund-raising activities that ranged from filling 100 clothes bags, selling cakes and doughnuts, and paying for the privilege of coming to school in non-uniform. Solihull Junior School also contributed part of the proceeds of its Charity Week to the Appeal.

Through its links with Anne Lavery, a Big Build Appeal Committee Member and parent of a pupil, Solihull School also sponsored local community fund-raising with the free loan of its Bushell Hall for a series of comedy and drama nights.

Martyn Garner, Senior Teacher: Co-Curricular, said: “Our boys and girls were thrilled to meet Prince Charles, who spoke to everyone in turn, and to inspect the wonderful new facility and gardens on a day they will always remember.”

Solihull School is holding a ‘Meet and Greet’ information evening at Edgbaston Cricket Ground on Wednesday, September 18 from 6pm and an Open Morning on its Warwick Road, Solihull campus on Saturday, September 28 from 10am to noon. The Admissions Secretary can be contacted on 0121 705 4273 email: enquiries@solsch.org.uk.