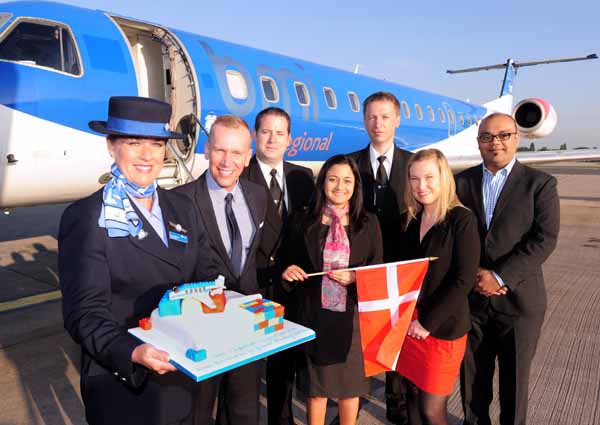 Representatives and crew from bmi regional and Birmingham Airport celebrate the launch of new services to Billund, Denmark – the home of Lego.

The start of the new six times a week service to Billund is the last of four new routes launched by the full service scheduled airline this year from Birmingham, adding to its recent start ups to Lyon, Toulouse and Gothenburg.

More than 70 Danish companies have offices in the Midlands and more than 40% of Danes travel to the West Midlands for business. Furthermore, 42% of total Danish GDP is generated within Billund Airport’s catchment area.

Billund Airport is well served by train, bus and taxi services and is only a short distance from popular Legoland, Lalandia Aquadome and Givskud Zoo. It also provides easy access to the much lauded Jutland Peninsula which offers stunning walks, biking and log cabins.

bmi regional’s CEO, Cathal O’Connell, said: We’re pleased to launch the last of our four services from Birmingham today to Billund. With fares starting from as little as £59 each way, we’re reducing both the cost and travel time for both business and leisure travellers who wish to travel to West Denmark. With increasing congestion in some London airports, Birmingham Airport is a great alternative to those who recognise the benefits of less crowded airports, speedy boarding, good shopping and eating facilities.”

Martyn Lloyd, Commercial Director, Birmingham Airport, said: “We’re delighted that bmi regional has made this commitment in the Midlands. The brand new route will greatly improve business connections between our region and the West of Denmark, and offer an alternative leisure break to the original Legoland and the home of Lego.”

bmi regional has already created 75 new jobs in the Midlands in the last six months and the new air service will create a better network for both leisure and business travellers from the Midlands. bmi regional became independent from BMI in June 2012 and employs over 400 staff throughout the UK.

bmi regional flights can be booked now at www.bmiregional.com. Fares start from £59, one way including taxes and charges. The airline operates a fleet of 49 seat Embraer aircraft.