Campaigners from Birmingham Friends of the Earth will launch their new campaign Let’s Get Moving today with a stunt outside Birmingham Town Hall. 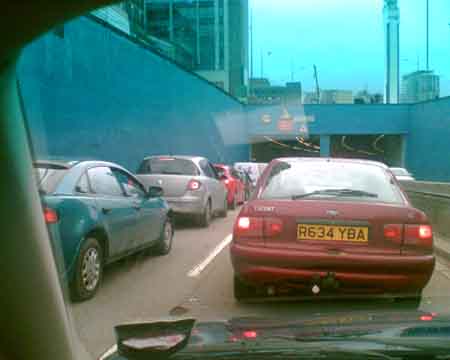 Campaigners dressed in gas masks will be holding a banner stood outside the Town Hall by the roadside at Paradise Circus, to make the point that Birmingham needs to get moving on the issue of air pollution.

Birmingham Friends of the Earth are launching their Let’s Get Moving campaign in order to highlight the problem of air pollution in the city, and push for greater investment in cycling and walking infrastructure in order to combat the problem.

They argue that the city’s traffic is by far the biggest cause of air pollution, and so having a much greater proportion of journeys being made on foot or by bike would go a long way towards cutting traffic and air pollution.

The group are calling on the council to invest in active transport and make it easier for people to choose to walk or cycle. This would help cut the number of car journeys and air pollution levels on some of Birmingham’s busiest roads.

Robert Pass, Campaigns Co-ordinator at Birmingham Friends of the Earth, said: “Air pollution is often overlooked, but it is a huge problem, with massive health impacts that we can no longer ignore. Brummies are breathing in a toxic mix of chemicals on a daily basis, largely through traffic related tailpipe emissions.

“It’s estimated that poor air quality is responsible for between 19,000 and 50,000 premature deaths a year in the UK, compared to around 2000 deaths due to road accidents. It’s a great scandal that air pollution is not taken more seriously.

“Last month the Supreme Court ruled that the UK is failing to protect its citizens from illegal limits of air pollution in 16 cities including Birmingham, and we know that a lot more can be done locally to help tackle the problem.

As traffic is by far the biggest cause of air pollution, especially in Birmingham, the best way to start to tackling this is by cutting the number of journeys being made by car.

Robert continued: “20% of car journeys are under 2 miles, so there is a real potential for those journeys to be made by bike. However in Birmingham it isn’t easy to make that positive choice, as the city lacks enough cycling infrastructure to make cycling safe and enjoyable.

“We’re calling on the council to be ambitious in its walking and cycling journey targets and find the investment to make this happen.”

The group are planning several events as part of the campaign, to raise awareness of air pollution and promote cycling and walking. This includes Bike Trains into the city centre on 26th July.