Laurence Inman is a lot fitter than he looks. Certainly fit enough to assault his telly – again! 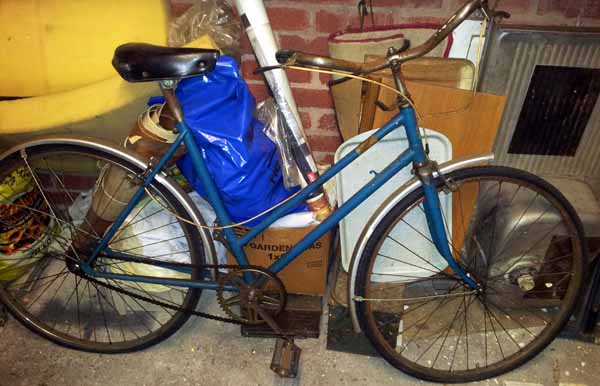 My younger son has got himself a bike. This is to replace the bike he already owns. But he’s going to keep Bike One for rainy days. I was hoping he might push it in my direction, but no. Actually, I’m quite relieved; I’ve just built a bike-shed for the two bikes I already don’t ride and there simply isn’t room in it for a third. These bikes (his) are very expensive. It hasn’t been that long since you could have bought a pretty good second-hand car for the price of the new one and the number of decades that have passed since you would have paid for a reasonable house with the money the first one cost is still in single figures. My own bike, which I use only for footling up to the Eye Hospital on the canal path now and again, was free. My brother gave it to me. He’s got lots of old bikes in his back garden. He keeps saying he’s going to do them up.

My son has also entered us both for the half-marathon in October. Running is really more my thing. We last did a race together a few years ago. It was the 10K in Sutton Park. He beat me, but by less than a minute. I was quite pleased by this, but I could see it puzzled him a little; I’m sure he thinks I fiddled it somehow. He was born a few weeks before my thirty-seventh birthday, so I can see his point.

Anyway, training has begun. In the last five weeks I’ve lost half a stone, but I’ve managed to injure a calf muscle as well, so I’m nowhere near the stage I should be at, which is jogging along at eight-minute miles for at least half-an-hour.

Ooops! This is the first mistake any runner makes – letting numbers in!

I should forget times, targets, graphs, charts, distance-progressions. The feeling, the drug I want again, is the simple joy of tapping along, skimming the surface of the earth, with no effort and no constriction, as if I could carry on forever. To do anything else is to replace one lot of stress with another, the very thing I run in the first place to avoid!

So the fight goes on. Once my calf clears up it’ll be something else – feet probably. And I need my feet. I need both of them. I really need sixteen feet over the next sixteen weeks. I need them to put through the telly every time The Apprentice comes on. And don’t say I enjoy it really, because I don’t.