Tickets are now available to purchase for The Ultimate Cycling Prize Draw with all proceeds going towards The Tour 21 team’s fundraising for Cure Leukaemia.

The raffle win run from fifty days out, up until Friday 18th June, the day before the start of The Tour 21 with a prize draw then held daily from June 19th-July 11th. It costs £21 to enter the raffle and, once entered, people will be automatically included in each of the 21 prize draws.

Leading the team on his final Tour de France challenge is ex-England footballer, blood cancer survivor and Cure Leukaemia Patron Geoff Thomas (pictured), 56, who said: “We were meant to take on this challenge in 2020 before COVID-19 meant we had to 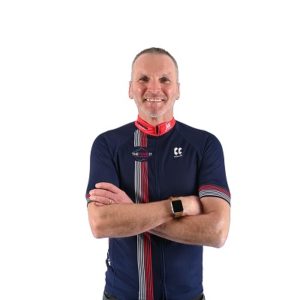 postpone. But in that time, we have added to the team and become the official charity partner of the Tour de France in the UK. There is real momentum behind what we are doing as a team and with Cure Leukaemia recording a £1,700,000 fundraising shortfall last year it is imperative that we surpass £1,000,000 to ensure patients across the UK have access to potentially lifesaving clinical trials.

“I would urge the public to get involved in these fantastic fundraising opportunities announced today because they have the potential to take our fundraising way beyond our target, you can all play your part in The Tour 21.”

Premier League football club Crystal Palace, Geoff’s former club, has also given its support to Geoff and the team as the off-bike kit partner and stag sponsor. Chief Executive Phil Alexander said: “Geoff was an inspirational captain for our football club, and he has continued to be an inspiration with his tireless fundraising efforts since his battle with blood cancer. Crystal Palace are proud to have supported him in his fundraising ventures over the last 18 years and we are proud to do so again for his final Tour de France challenge this summer.

“Cure Leukaemia is a charity making a direct impact on the treatment of blood cancer both nationally and internationally and we are delighted to help Geoff and the team towards surpassing their £1,000,000 target. I also hope that the Palace fans will play their part too in the coming months through these additional fundraising opportunities announced today and I wish Geoff and the team the very best of luck for their epic challenge.”

Cure Leukaemia Chief Executive James McLaughlin continued: “Geoff and all of the team are training phenomenally hard at the moment to be ready ahead of June 19th and to have raised over £600,000 in such challenging times is already a fantastic achievement.

However, we are keen for as many people as possible to support The Tour21 team and we hope by supporting these two new fundraising opportunities, the £1,000,000 target will be reached by the time Geoff leads the 25 strong team into Paris on Sunday 11th July.”