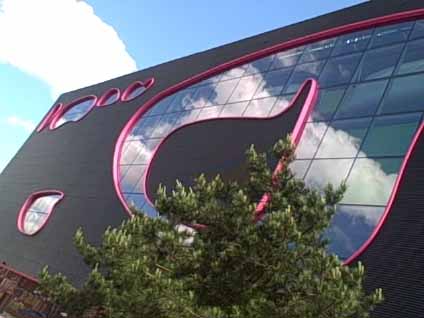 Since opening in August 2009, The Public has seen steadily increasing visitor numbers, with over 380,000 in 2012-13, and its one millionth visitor expected this June.

Playing a valuable contribution in the regeneration of West Bromwich, over half of the people who visit the Black Country venue are Sandwell people and come for a diverse number of activities from music and comedy to annual celebrations such as St Patrick’s Day and regular events such as tea dance and Zumba.  Their comedy line up is attracting well known stars of the calibre of Al Murray, Alexei Sayle and Jenny Éclair to West Bromwich and May Bank Holiday sees the return of the popular Now We Are Weekender – a two day music festival featuring 24 bands from the West Midlands and further afield.

During school holiday periods hundreds of families from across the region choose The Public as a great day out, attending sell-out workshops and children theatre, and exploring the gallery’s free exhibitions.  Throughout 2012-13 venue also welcomed over 100 work experience placements from across Sandwell, providing young learners with a high quality experience that enhances their lives and gives them a platform to develop skills and opportunities.

The Public continue to nurture new and young artists and provide them with the opportunity to showcase their work alongside established, highly regarded artists. In 2012 their annual Summer Show received over 300 submissions, and in 2013 the open exhibition will provide Sandwell people with an opportunity to display their work alongside work by Tracey Emin, Martin Creed and recent Turner Prize nominee, David Shrigley.

The Public is home to 27 businesses employing over 60 people and offering 100 plus creative apprenticeships, in addition a number of community organisations regularly use the venue.

Whilst Sandwell Arts Trust acknowledge Sandwell MBC and Sandwell College are currently engaged in talks which could see the college turning The Public into a sixth form facility for 500 ‘A’ Level Students, SAT see the future of the venue as an arts centre, continuing to build on the success of the previous four years.

Jan Britton, Chief Executive of Sandwell Metropolitan Borough Council said: “The review by the Council of the future options for operating the building has always been part of our agreement with Sandwell Arts Trust.  The Council is very pleased with the progress The Public has made in contributing to the lives of Sandwell and West Bromwich people.”

Andrew Fry, Chair of Sandwell Arts Trust Board said: “We are very aware of the difficult financial choices facing the Council at this time. We will continue to operate The Public as normal during these circumstances and work with the Council to provide the best value for the people of Sandwell.”