Comux UK, the community not-for-profit business selected by Ofcom to build and operate the local TV broadcasting platform, will be located at Birmingham Science Park Aston’s Innovation Birmingham Campus. 20 new jobs are being created for local people as a result. 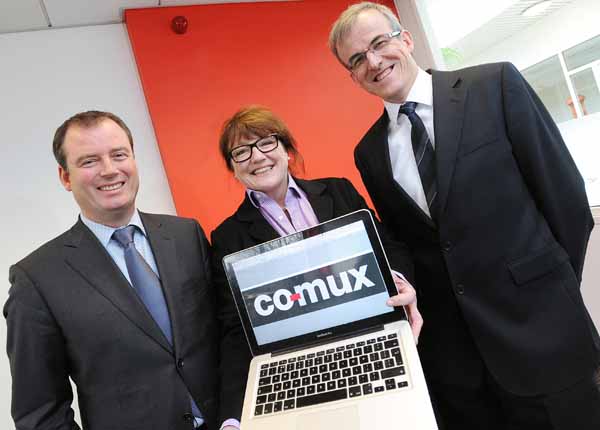 Comux will occupy three suites within the ground floor of the Faraday Wharf building totalling 1,665 sq ft. One suite will be dedicated to broadcast operations, one will house the servers required to power the local TV stations that will be operational across the UK, with the third suite being occupied by the operations team.

The Ofcom licence has been awarded to Comux for 12 years, which coincides with the lease term taken out on the space at the Innovation Birmingham Campus.  Comux selected the location because of the provision of 2Gbit/s broadband connectivity. It is working with the specialist Science Park provider of this infrastructure ­– WarwickNet – to install the broadcast capability to each local TV station across the UK that has been awarded an OfCom licence. There will be 19 stations in the first phase, which are due to be live by end of 2013.

Comux UK Founder Ed Hall said: “Ofcom’s local TV initiative is one of the most exciting changes to the UK’s TV landscape for many years. Previously local TV has been limited to a handful of cities, but soon there will be up to 60 towns and cities with their own dedicated channel, serving the local community.

“Basing the Comux operation at the Innovation Birmingham Campus makes absolute business sense. For one, it is an urban location in the centre of the country with very good accessibility, but crucially it is one of the only places that is capable of providing the infrastructure we need to power a UK wide network of local TV stations. The Innovation Birmingham team has bent over backwards to fulfil our unique requirements and we can’t wait to move in and set everything in place to enable the first 19 channels to commence broadcasting.”

Dr David Hardman MBE, CEO of Innovation Birmingham said: “Attracting Comux to Birmingham is a huge coup for the city. Whilst there is much still to be done to enhance digital connectivity across Greater Birmingham, our strategic investment in 2Gbit/s broadband earlier this year has enabled us to meet Comux’s exacting location requirements. I am also delighted that this means 20 high-value jobs are being created here.

“This significant letting takes our Faraday Wharf building up to an occupancy level of 95 per cent, which is a tremendous vote of confidence for the work we are doing to harness the city’s digital community and create several new tech start-ups each month. It also forms the basis for a new tech-facing digital media hub in the city, which alongside the burgeoning games and ICT community on the Innovation Birmingham Campus, creates a real opportunity to enhance and promote Birmingham’s tech cluster credentials.”

Digital UK has allocated prominent channel numbers for local TV; position 8 on the Freeview TV guide in England and Northern Ireland, and position 45 in Wales and Scotland. Originally conceived by former culture secretary Jeremy Hunt, the local TV initiative aims to create a vibrant network of stations that can serve local communities, improve local democracy and provide an alternative to the BBC’s services. Alongside broadcasting on digital terrestrial TV, the local channels are expected to go live on satellite and cable TV, and online. Each station will be required to raise their own advertising revenue, but the BBC has also pledged £25 million of funding to the local TV initiative up to 2017.

Comux UK is a co-operative not-for-profit organisation, owned in equal measure by the local TV licensees and Canis Media; one of the most established TV and broadcast management companies in the UK. Comux UK’s profits will be channelled back into local TV.