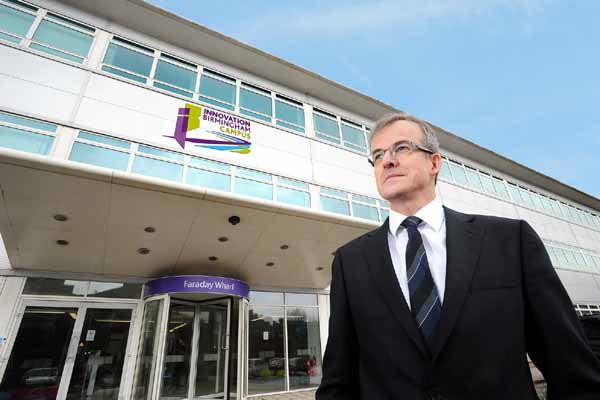 The restructure will enable the value of Faraday Wharf to be utilised to part-fund iCentrum; the first Digital Plaza building.

Innovation Birmingham Limited encompasses the longstanding science park team and remains wholly owned by Birmingham City Council, which also has full ownership of the rest of the 14 acre park. To provide clarity, the park will be promoted as two campuses going forwards; the Innovation Birmingham Campus and the Science & Technology Campus.

The 44,000 sq ft Faraday Wharf building, which contains 70 office suites for entrepreneurial technology businesses, is now over 95 per cent occupied. In order to provide expansion space on the Innovation Birmingham Campus, before iCentrum– the first Digital Plaza building – is ready for occupation, plans are being developed for 2,000 sq ft of contemporary pod offices to be constructed on the podium car park. Subject to planning permission, the pod accommodation will be available for occupation this summer.

Sir Albert Bore, Leader of Birmingham City Council said: “The community of technology entrepreneurs that has been nurtured at Birmingham Science Park Aston over the past 30 years is a credit to Greater Birmingham. Other large science parks across the country have created campuses to profile specific activity and now we are following suit. The creation of the Innovation Birmingham Campus is wholly aligned with our Smart City agenda and it will enhance the profile and importance of innovation activity taking place within the city.

“Over the past three and a half years, 70 start-up technology businesses have been launched through the Entrepreneurs for the Future business incubation programme, based at Faraday Wharf. The growth of these innovative companies could make a real difference to the city’s economic performance and so far, over 130 new high value jobs and directorships have been created.”

“The dynamic tech starts-ups and SMEs currently based within Faraday Wharf are testament that Birmingham is a great place to base new tech businesses. There is also a pool of highly relevant talent right on our door step, thanks to Birmingham City University, Birmingham Ormiston Academy, Birmingham Metropolitan College, Aston University Engineering Academy  and Aston University itself, representing a key advantage to so many of our tenants. In addition, the cost of living and running an office is a fraction of the comparable cost of being in London.

“One initiative that I have no doubt will be boosted by the clarity of the new Innovation Birmingham brand is engagement with major employers located across Greater Birmingham. The key to the success of many tech start-ups could be unlocked by established, prominent companies playing a disproportionate role in seeding local cluster development. By acting as ambassadors for the city and working more closely with inward investment agencies and Innovation Birmingham, major employers could be much more effective as magnets to attract and promote further growth and employment in the tech businesses based at the Innovation Birmingham Campus now and in the future.”

Birmingham Science Park Aston is the gateway to the Eastside learning and knowledge quarter, with the Digital Plaza site accessed off Holt Street/Enterprise Way and A38 Aston Expressway. This vacant development plot, which is within the Park’s Innovation Birmingham Campus, is one of 26 sites covered by Greater Birmingham and Solihull LEP’s Enterprise Zone. The Digital Plaza will be one of the first Enterprise Zone developments to get underway and will enable its future occupiers to benefit from Business Rates relief. The first new Digital Plaza building will be the circa £8m iCentrum building, which will include a ground-breaking software development playground and a 10,000 sq ft tech incubation facility.

In advance of construction work getting underway on the Digital Plaza development, a 2Gbit/s diverse internet transit is being installed across the entirety of the 14 acre Birmingham Science Park Aston estate.

The significant broadband investment is a reflection of the needs of the Park’s technology-focused tenant portfolio. There are 10 buildings across the Science Park, and within Faraday Wharf alone, over 20 per cent of the tenants are digital gaming studios. A similar percentage specialise in mobile app development, while other tenants provide link data, computer programming and search engine services.

The 2Gbit/s capacity will enable Science Park tenants to have a dedicated, resilient broadband connection of up to 100Mbit/s. Such speeds enable a two hour, full HD film to download in less than five minutes, and YouTube clips and websites to load instantly.