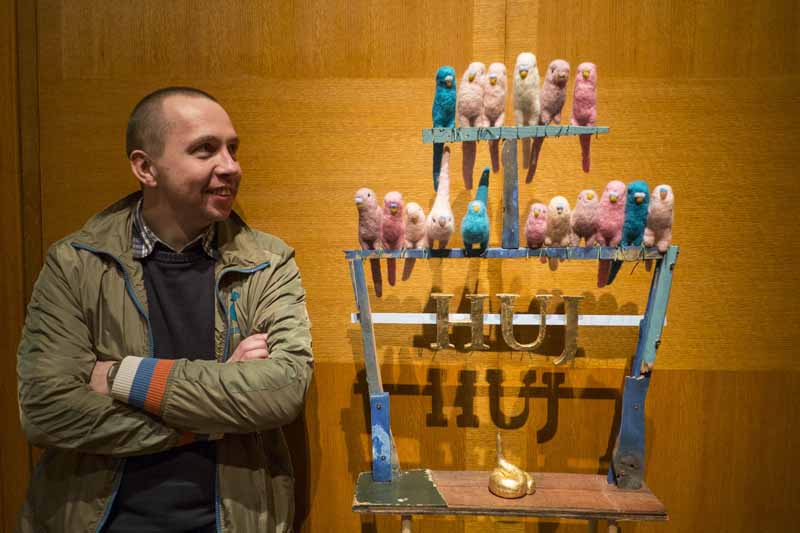 An altar featuring felt budgies and foil-wrapped ‘turds’ and a bicycle wrapped in wool are among the varied exhibits now on show in three Birmingham galleries as part of the award exhibition New Art West Midlands.

The best new work produced by recent graduates from the region’s five university art colleges was celebrated on Thursday evening (7 March) in a prize-giving at the Barber Institute of Fine Arts, University of Birmingham. 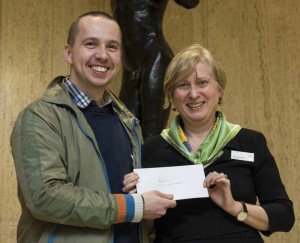 Runner-up prizes of £500 each were awarded to Corey Hayman, a graduate of Coventry University and Stuart Layton, who studied at the University of Worcester. These graduates also received bursaries to make new work for the exhibition.

Exhibitions now open to the public at Birmingham Museum and Art Gallery, the Barber Institute of Fine Arts and Grand Union in Digbeth display the work of some 22 emerging artists, chosen from a long list of applicants by selectors Jeremy Millar, artist and tutor in Art Criticism at the Royal College of Art; Lynda Morris, Chair of Curation and Art History at Norwich University College of the Arts and Keith Piper, artist and Programme Leader of the MA Fine Art programme at Middlesex University.

Wendy Law said judges had been impressed by the wide range of subject matter and media. “The artists selected displayed an awareness not only of what is going on in contemporary art today – they are working with and commenting on political, historical and social issues,” said Wendy. “There is a real maturity across the work in terms of the ideas  and their execution.”

Nicola Kalinsky said that all three winners had displayed not only maturity and professionalism, but also potential for growth as artists.

“Rafal Zar’s work is very coherent and assured: It’s visually very striking, and creates resonances drawn from popular culture that are both familiar and also alien. There was an ambition to his work which interested us all. Corey Hayman and Stuart Layton’s pieces were also very individual, very urban, and had a remarkably assured quality and authenticity about them.”

Simon Cane added: ‘This was a remarkable opening year for the New Art West Midlands project and the culmination of a hugely worthwhile collaborative project between the three galleries, Turning Point West Midlands and the five universities. It certainly augurs well for the future of New Art West Midlands – and is a revelation of the immense artistic talent and creativity being nurtured in – and by – the region and its art schools.’

New Art West Midlands continues at Birmingham Museum & Art Gallery and The Barber Institute of Fine Arts until 19 May 2013, and at Grand Union, Digbeth, until 16 March 2013.