In which our travel columnist attempts a journey to the final frontier. 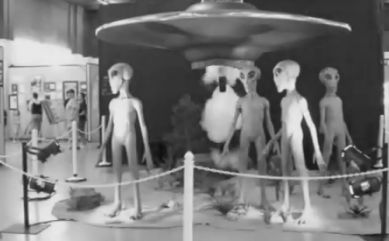 There’s nothing better to do on a sunny morning in Albuquerque than to decide to go and visit some aliens.

To be more precise, to fly to Roswell, New Mexico, rent a car, and head out to the UFO museum to see what really happened in 1947 when an alleged spacecraft/weather balloon landed in the desert complete with aliens/an overactive imagination.  Whatever your views on UFOs, it sounded like an adventure, and an adventure we were ready to have.

Tickets purchased, we headed off to the airport.  Today’s flight was on the kind of plane you expect to see protected by a couple of normal sized regional turboprops, it was that small.  Small enough not to be let out without an adult chaperone.  Single rows of seats each side and an open cockpit kind of small.  Now that’s my sort of plane. I can pretend I’m flying.  And indeed, I was so close behind the copilot that with a small stretch, it could have been possible.

With a light load of passengers, the pilot started the engines, the plane buzzed, and we were off.  Making a noise like an irritating neighbour drilling on a Sunday morning, we were up and away.  It was only a short hop to Roswell, and I started thinking about what the day would bring: a hire car, a drive into the desert, and a visit to the museum.  Shame it was getting a bit cloudy.  And very low-lying cloud  too.  Ah, that’s not low-lying cloud, it’s snow.  Very pretty it was too.  I could see the tracery of fields outlined below, the occasional house.  I wondered whether we were flying over any weather balloons.

We began to lose height for the landing.  The pilot was chatting nonchalantly on the radio, while the co-pilot fiddled with some kind of check list.  Then when it looked as though we were coming into land, I was pushed back in my seat by the acceleration as the pilot decided we needed to go around.  A few of us exchanged glances.  No biggie really, for seasoned travellers, of course.  We readjusted the bits of baggage that had slid towards the back of the cabin.  I was surprised to see a ski bag across the back seats.

The copilot started to rustle with a book of approach plates, and we got ready to land again.  It was difficult to judge how far from the airport we were.  The pilot chatter sounded a little less friendly, and a silence fell in the back of the plane, as we all listened intently.  We started the descent once more.  Then once again, we sped up like a roller coaster, circled to the sound of more agitated pilot chatter and came into try for a third time.

Suddenly that book of approach plates flew past my left elbow.  And then came the sound of something you really only want to hear on an episode of Air Crash Investigation, and only then if you know the people survived.  The Ground Proximity Alarm went off.  ”Terrain, Pull, Up, Pull Up.  Terrain.  Pull Up, Pull Up.”  The pilot uttered something I gathered to be an expletive, and again we swooped upward, coughing and stuttering a little more this time.  There was a dank, rather sweaty silence in the cabin.

We circled a little more, and came in from a different direction for the approach.  There didn’t seem to have been much of an attempt to clear the runway, but perhaps that’s just my imagination, as we landed safely.  We juddered to a halt next to the terminal building, where pilot unbuckled, wiped his brow and uttered the words “Thank you for flying with Mesa Airlines”.

The Travelator is Bernadette Jackson, travel business owner, avid traveller, blogger and lover of the absurd. You can reach her at bjackson@cruiseholidays.co.uk  and on Twitter at @BJacksonCHUK. Her Facebook page is here And her website is here