As part of its 100th birthday season, Birmingham Repertory Theatre presents the world première of Heather Gardner, a new version of Henrik Ibsen’s Hedda Gabler by Birmingham writer, Robin French, at The Old Rep Theatre from 14 to 28 March. 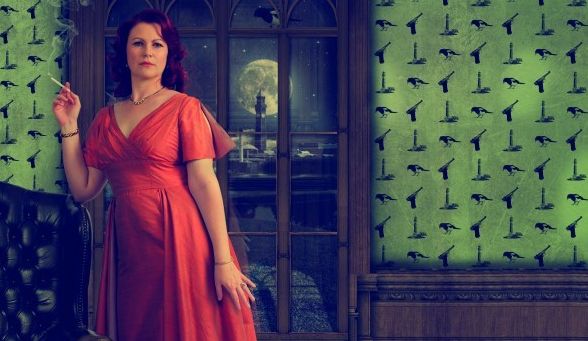 This fresh and stylish new version, directed by Mike Bradwell, is set in the 1960s in Birmingham’s affluent Edgbaston in the home of former Prime Minister, Neville Chamberlain’s – and just down the road from where writer Robin grew up.

It’s September 1962. Beautiful socialite Heather returns from her honeymoon to her dream home in upmarket Edgbaston, but nothing is turning out as planned. Heather soon finds herself in a spiral of self-destruction, caught between her old flame, Alec Lambart and the clutches of predatory solicitor Peregrine Brand. There can only be one outcome.

Robin says of Heather Gardner: “I’m head over heels in love with the play Hedda Gabler. It’s mysterious, dangerous and darkly funny. The original is set in the house of the widow of a former cabinet minister, and I started to think about the house that Neville and Anne Chamberlain spent over forty years in – only two minutes walk from the house where I grew up. From that initial clue, I started to conceive a version (I think of it like a cover version) of the play set in Edgbaston in September 1962. I was surprised by how many elements of the original seemed to fit this transition, and writing Heather Gardner was an immense pleasure from start to finish. I hope, like a cover version of a great song, that Heather Gardner offers the audience an enjoyable new perspective on Ibsen’s genius.”

A former King Edward’s School pupil, Robin French has been hailed by the Guardian as a “young star in the ascendant” and has twice been named a ‘Hotshot’ by Broadcast magazine. His debut play, Bear Hug, won the Royal Court Young Writer’s Festival and was produced at the Royal Court in 2004, where it earned an extended run. Robin has also recently co-written the new cult TV series Cuckoo for BBC3.

Elisabeth Hopper plays Heather Gardner. Elisabeth’s recent credits include playing Miranda opposite Ralph Fiennes in Trevor Nunn’s West End production of The Tempest. Playing Peregrine Brand is Christopher Ettridge. Christopher previously appeared at The REP in Hapgood and His Dark Materials and his other credits include The Histories at the RSC and Democracy at the National. The cast is completed with James Bradshaw as George, Maisie Turpie as Dorothy Edwards, Bert Woodhead as Roderick Smith, Sean Hart as Alec Lambert and Rosalind March as Aunt June.

Former artistic director of The Bush and founder of Hull Truck Theatre Company Mike Bradwell directs Heather Gardner in what will be his first production for The REP. Design is by Jamie Vartan, with lighting design by Rick Fisher and sound design by Dan Hoole.