Steve Beauchampé took the bus to Symphony Hall for a folk extravaganza from a much loved British icon. 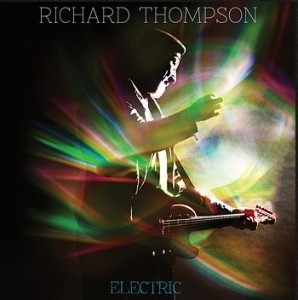 A week and a half after the release of his latest album, Electric, and Richard Thompson is in Birmingham for the opening night of his latest UK tour. Although based in the United States (the new album being recorded in Nashville with producer Buddy Miller) guitarist Thompson is a regular visitor to the city and plays tonight as part of a trio, including bassist Taras Prodoniuk and drummer Michael Jerome (the duo that also played on the album). As a founder member of Fairport Convention, and almost a fixture at their annual festival in Cropredy, Thompson is folk royalty and his shows are always sold out, or as near as makes no difference. His recorded output is fairly prolific, and rarely does a year pass without the release of something new for his fans. Given the lack of High Street retail outlets for his music (and most other people’s too!), the merchandise stall is doing brisk trade, with Thompson’s almost exclusively 40+ audience proving that the age of the CD (and even the vinyl LP) isn’t yet over. Even support act Robert Ellis is selling well too, as he stands greeting a constant flow of admirers and purchasers during the interval.

Intermission over and the Thompson trio assemble on stage, opening with three cuts from Electric; funky folk number Standing on the Treadmill, the rockier Sally B and Salford Sunday (that’s the L.S. Lowry Salford, not the BBC-era version).

At 63-years old, Thompson is a little greyer and thinner on top, but his trademark black beret leaves us to guess the extent of both. The sound balance is perfectly weighted and no instrument (or Thompson’s voice) drowns out any other. Although rightly lauded as a brilliant guitarist, I’m as much drawn to Richard Thompson’s vocal style, particularly his slightly rustic hue and clarity of delivery. Every word that passes his lips, both on record and in concert, is audible and unambiguous, allowing the listener to savour and enjoy each phrase, word and nuance of his stories and arguments.

Which makes it a shame that while Richard Thompson’s followers will undoubtedly stick with him for life, younger generations can’t seem to find a way into his music.

After an outing for My Enemy, the 1986 classic Al Bowlly’s In Heaven (good contemporary musical reference to attract the kids there!) follows…”that was a voice, that was a band” intones Thompson…it was and they were!  Good Things Happen To Bad People follows, an early contender for Electric’s standout track, before it’s back to the back catalogue again for Sidney Wells.  Although Thompson refers to it as a ‘murder ballad’, his stock in trade songs concern human relationships and the frailties that lie within them; darkly mature love songs showing that emotional immaturity and insecurity persists irrespective of age or experience. Next song, I Wish I Was A Fool For You Again, is a fine example of this.

If Love Whispers Your Name closes the pre-encore part of the set, Wall of Death, Stoney Ground (Electric’s opening track) and a sea shanty, Haul Her Away, form the early part of what follows. In truth, the performance has been solid and dependable, rather than soaring and dramatic. Opening night syndrome perhaps, with the band still only at part pelt. The final two numbers – From Galway to Graceland (Thompson playing acoustic, and solo) and Tear Stained Letter – are amongst the evening’s best and the band leave the stage to warm and heartfelt applause.

A little low key at times perhaps, but ultimately – both on record and in live performance – Richard Thompson always delivers.

One thought on “Gig Review: Richard Thompson at Symphony Hall”