The Birmingham Press has been granted rights to use some pictures of historic interest showing how Birmingham has changed. As Alan Clawley explains, history has a habit of repeating itself.

Such is the pace of change in some parts of our city centre that anyone who has lived here for just a few years will have watched a familiar building go and a more ‘up-to-date’ version appear in its place. Someone who has lived in the city much longer would have seen some familiar buildings demolished and replaced by modern ones that were in turn replaced with something even more ‘modern’.

Such is the experience of Niky Rathbone, who worked as a librarian in the Victorian Central Reference Library.

Writing to me in January 2013, Niky recalled that the old library was a beautiful building, though very run down and the stock had much outgrown the space. She accepts that the building was ‘not fit for the 20th century’ as it was, but still feels that a good option would have been to retain, refurbish and extend the building with a modern annex.

In a recent email to me Niky wrote: “The Barry library burned down in 1879. The J.H. Chamberlain re-build and extension opened in 1882.  Chamberlain was much influenced by Ruskin’s Stones of Venice.  His Venetian Gothic additions to the Barry building were not universally admired but all critics loved the Shakespeare Memorial Room which was incorporated into the later Wing.  It was designed on the model of an Elizabethan wood panelled room. The woodwork was carried out by M. Barfield who also worked with Chamberlain on The Grove (William Kendrick anteroom now in the V&A) and Highbury for Joseph Chamberlain. The Victorian Society fought to save the old library but they lost. The only concession was that the Shakespeare Memorial Room be saved and incorporated into the new complex. The wooden bookcases were dismantled (not difficult as all the shelving is numbered on the back) and put into store. When it was re-created the people stencilling the ceiling failed to stencil the centre panel of the ceiling. We opened the room to visitors on City Centre Discovery Day and otherwise by appointment. I eventually became Shakespeare Librarian so I know it quite well.”

The old library was demolished in 1974 when the new Central Library designed by John Madin was opened next door. Niki moved into the new building along with the books but just before the old building disappeared under a cloud of dust Niky took her Kodak Instamatic camera to the top of the new library to record its last days.

Here are some of the pictures that she took. 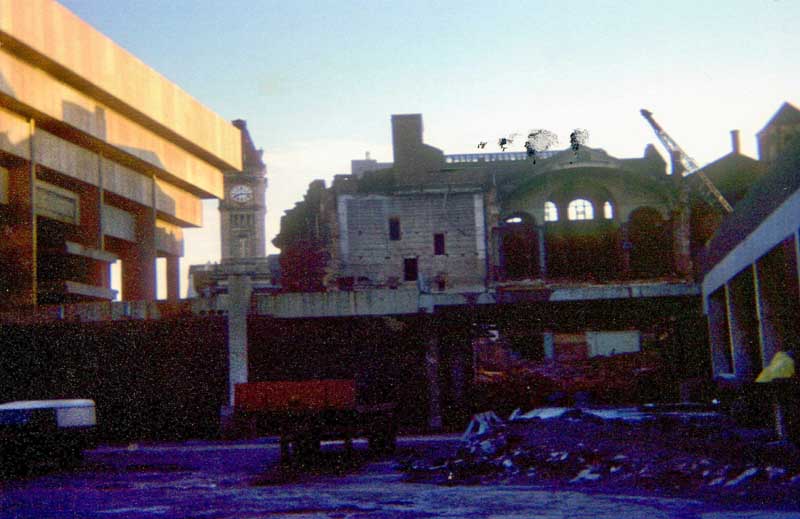 Looking ENE past the old library Extension to the Council House Clock Tower.
The concrete sub-structure of School of Music on the right completed at same time as the Central Library which is on the left. 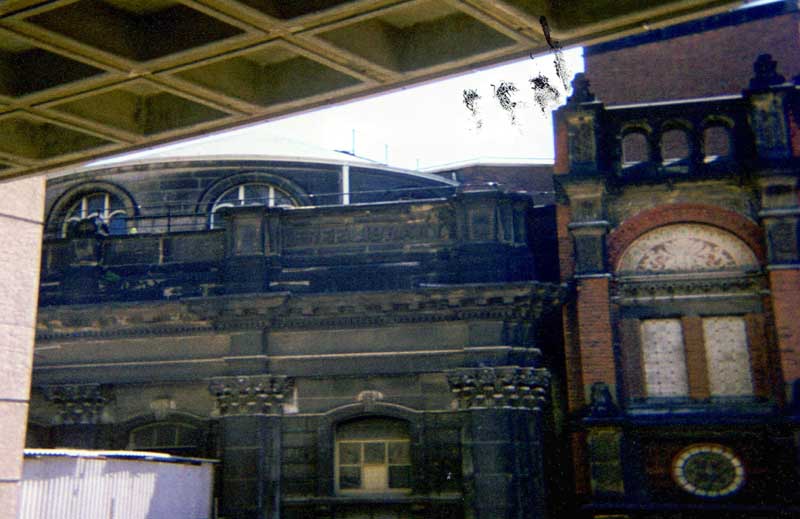 Barry’s classical 1865 façade on L, Chamberlain’s Lombardic extension on the right from an upper floor of the CL looking SSE. Coffered concrete underside of CL above. 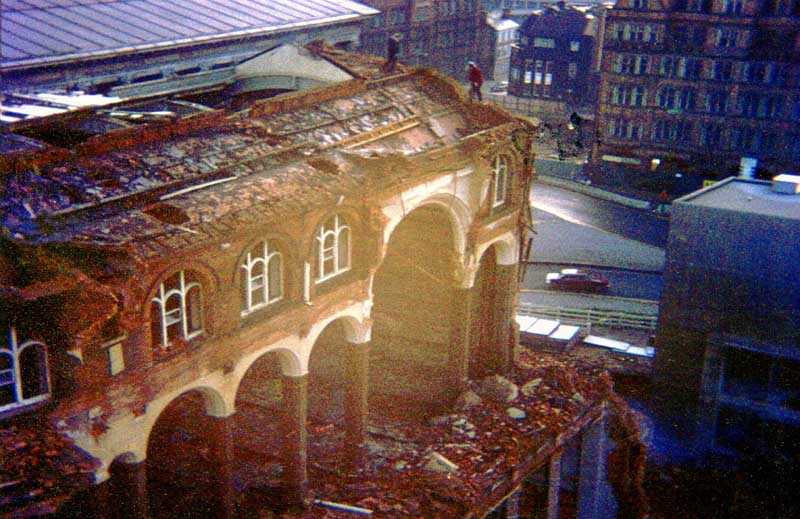 Looking SE from an upper floor of the CL. Two demolition workers standing on top of the part-demolished gable end. Completed School of Music on the right. Queens Chambers in Paradise Street in background. Roof of Town Hall on the left. 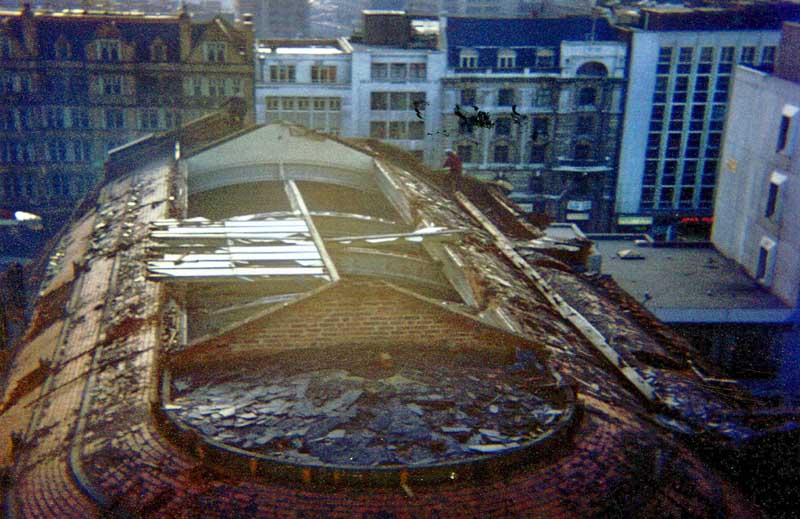 Looking SSE to Paradise Street from an upper floor of the CL across the roof of the old library. School of Music on the right. 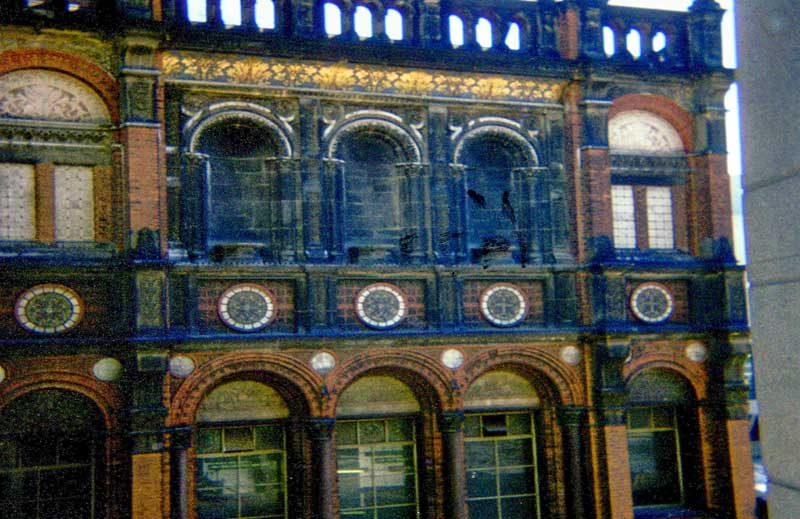 Looking SSW to the façade of the 1879 Lombardic library Extension designed by by J H Chamberlain from the new library concourse. Concrete column of CL on the right.

Some 35 years later, history looked like repeating itself. The librarians of the late 20th century began to talk about the Central Library in the same terms as they had its predecessor. This time it was ’not fit for the 21st century’; it wasn’t designed with computers in mind, it didn’t have enough space for the archives, the escalators were too narrow and there weren’t enough lifts for the public, it was too gloomy and unwelcoming. Once again the option of retaining, refurbishing and extending the building was rejected by the Council in favour of building a new one. 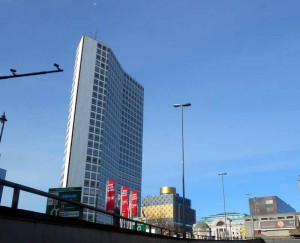 The Library of Birmingham is due to open in Centenary Square in September 2013 and the Central Library is scheduled for demolition in 2015.  Those of us who are campaigning to save it will be hoping that that Niky’s camera won’t be needed to record the second demolition of a central library in her own lifetime.