Birmingham firm Queen & Crawford has been recognised by Japanese giant Honda as leading innovators in the field of design and fabrication. 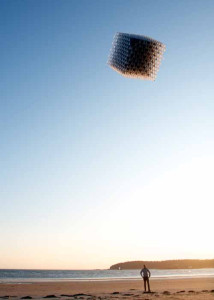 Footage of a unique sculpture made in Digbeth is being used by the car manufacturer in its latest advertisement, currently screened across the USA and online.

The sculpture, entitled Little Shining Man, is a flying kite-like structure made from 23,000 individual components. It is made with carbon fibre rods and Cuben fibre, a fabric usually used in racing yacht scales, all joined together with a unique system of Nylon joints manufactured using rapid prototyping technology. Together they make a cuboid which appears light and elegant despite its robust and complicated manufacture.

Queen & Crawford worked with artists Heather and Ivan Morison to create a workable design system for the sculpture. An initial prototype was considered so successful that the original plan to manufacture in China was abandoned, instead using Queen & Crawford and their network of Birmingham-based manufacturers and skilled labour to create the work.

Footage of Little Shining Man flying on St. Aubin’s Bay, Jersey, has now been used in the new advertisement for the Honda Civic, with the theme ‘Things can only get better’. The one-minute film shows several examples of innovative design, aligning the car with cutting edge technology. The sculpture has also appeared on television and print media in Asia and Australia, including Korea’s only educational television station where it will be used to promote mathematics in school.

Matthew Higginbotton, Director of Queen & Crawford, said: “Birmingham has a thriving culture of innovatism and manufacture which is being recognised globally. This was an inspiring project to work on that is now being seen across Asia and Australasia, which is fantastic for the reputation of British design and manufacturing overseas.”

Queen & Crawford is a bespoke manufacturing and design workshop working primarily with the contemporary art industry. It has worked with Tate Modern, Ikon Gallery, Venice Biennale and Frieze Art Fair amongst many others. Its current project Design for Pleasure involves the manufacture of a concrete geodesic shelter designed by artists Tom and Simon Bloor and commissioned by the Leamington Pump Rooms.