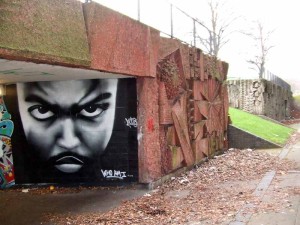 At some time or other, usually when we can’t avoid it, we find ourselves walking through a 1960s pedestrian underpass. We all know what’s wrong with them, but their main problem is that they were designed by road engineers. To be fair, some road engineers were humble enough to know that they were moving beyond their normal competence and asked architects and artists to help ‘beautify’ their work, thus allowing them to get on with the business of designing for the needs of high speed traffic. The top priority was mostly given to vehicles whilst pedestrians had to find their way between pillars, underneath bridges and through dank tunnels. We are still living with much of that unhappy legacy today.

Now imagine starting the other way round and giving pedestrians top priority. The highway engineer would then be asked to work around the primary needs of walkers. Colin Buchanan recommended this idea in the ‘60s and in Birmingham it resulted in the Central Library pedestrian concourse.

Outside the city centre some highways remained literally on top below which, in a brave effort to make life a bit nicer for pedestrians, the city engineers commissioned artists to install murals on the walls of the subway tunnels and retaining walls. Many of these, such as Kenneth Budd’s mosaic mural of J F Kennedy in St Chads Circus, have since been removed or destroyed with the subways which they once adorned. Luckily, the artist’s son, Oliver Budd, has been restoring what was salvaged of his father’s mural and he hopes that it will find a new home in the Irish Quarter of Digbeth. 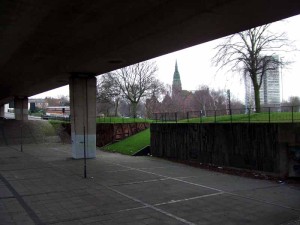 Another splendid example of subway art can still be found underneath Hockley Flyover. It’s a set of Bill Mitchell concrete sculptures that Owen Hatherley in his book ‘A New Kind of Bleak’ (2012) rates as Birmingham’s best work of art. 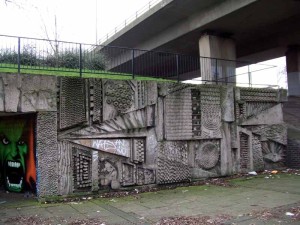 I have to admit that I’ve driven over the 1968 Flyover and around Hockley Circus hundreds of times and never spotted them. How could I have missed his best work in Birmingham for so long? The answer is that you have to be on foot, having navigated one of the pedestrian underpasses into the dramatic sunken open space underneath the flyover to see them. They adorn the vertical retaining walls on each side of the underpass exits.

Hatherley writes (pp110-11); ‘Hockley Circus’s bench-lined open space feels like it was built for sound systems with basslines bouncing between the concrete sculptures and stanchions, although that seems doubtfully part of Mitchell’s (or Manzoni’s) intention’.

Hockley Circus is only five minutes walk from Jewellery Station and a visit can easily be combined with a walking tour of the Jewellery Quarter and Key Hill Cemetery. Mitchell’s other work in Birmingham is on Quayside Tower in Broad Street (Madin 1966) and on the main doors of the former NatWest Bank (Madin 1975) in Colmore Row.