On Wednesday 9th January, three local Labour councillors, Lisa Trickett, Victoria Quinn and Tony Kennedy, and the Deputy Leader of the Council Ian Ward, met with the Friends of Moseley Road Baths and announced that they saw no long term future for swimming at Moseley Road Baths in Balsall Heath. 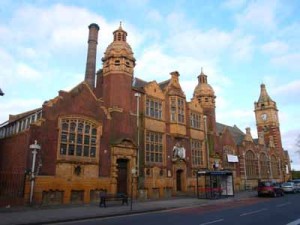 Friends of Moseley Road Baths represent pool users and those who care about the building and the future of swimming in the city and have campaigned hard over many years for the future of this well used Grade II* listed Edwardian swimming pool in inner city Birmingham, described as a “gem” by English Heritage.

Recently the council’s passed up the opportunity to attract several million pounds of Heritage Lottery funding to restore the building, on the basis that the council has no money to match fund. Instead they say they are committed merely to preserve the fabric of the building.  The Friends of Moseley Road Baths believe that swimming is a vital part of its future as a heritage building.

The Group’s Secretary, Rachel Gillies, said: ‘If these councillors were to walk into this facility in their own ward then they would see how busy the building is.  The fact that they would even contemplate closing it for swimming when there is such a high demand shows how out of touch they are with the electorate and how ignorant they are of the need for a facility where people of all ages can come and get fit.’

Closing the facility for swimming would leave local schools without a place to swim, meaning that a majority of local pupils would not meet the national standard for swimming proficiency.

There is a proposed new pool in Sparkhill.  Work however has yet to start. Even with that pool up and running, local schools and residents will not have enough swimming time (especially for women-only swimming which is in high demand).

The Friends are committed to continued public ownership of buildings such as Moseley Road Baths and see them as an asset to the City.

Jen Austin from the group questioned the consequences of moving the building to a Trust said: “At the moment we are able to have a dialogue with elected councillors and present our views. How would this democratic right and accountability be preserved if our pool is run by an independent trust?  “The Friends of Moseley Road Baths urge the council as our elected representatives to listen to the wishes of their constituents. We believe the community want to keep this building not just for its heritage but also as a swimming and sport facility. We challenge their decision and will be deciding our strategy this week at an open committee meeting in Balsall Heath.”

Moseley Road Baths is a Grade II* listed building and as such the Council has a statutory obligation to maintain the building.

The building has two pools, one is currently in use and is open for public, lane, school and group swimming, as well as swimming tuition.  The ‘Gala Pool’ has been closed since 2003.