Andy Goff made a rare trip out into the big world and rather enjoyed the experience. 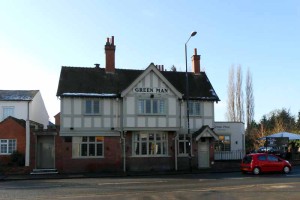 If you fancy a trip out of Brum and into leafy Warwickshire, look no further than Kenilworth…. nice independent shops, a glorious – albeit knocked about by Parliamentarians – castle and good places to eat. The Green Man, recently converted from an Ember Inns to an Ember Pub & Dining, is one of them.

My dining companion and I parked the car in the side car park on a cold day this week and headed to the warm interior of The Green Man.

We were told they could seat 137 but there wasn’t a sense of cramming tables in to maximise sales. When we arrived at midday the place was pretty quiet. An hour later the tables had filled and there was a quiet buzz of conversation. Too often in modern restaurants hard surfaces reflect sound instead of absorbing it and conversations become ever more strident to compensate. That wasn’t the case in the Green Man – despite the abundance of ladies-who-lunch. 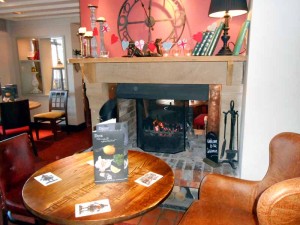 We were given a window table and scanned the menus.

The daytime set meal menu offers 2 courses for £6.95 or 3 for £8.95. I kicked off with a spiced carrot and lentil broth served with a bread roll and butter while companion tucked into almond crumbed Somerset brie with a double pepper relish. Both were delicious and just what was needed to warm the cockles on chilly day.

Second course for me was my old favourite, cottage pie served with savoy cabbage. She went off-piste and ordered a mushroom and squash risotto. If you like cabbage – which I do – the savoy was just right. Nice and crunchy with a tangy aftertaste. For those used to over-cooked soggy stuff this would not have been so good. My cottage pie was piping hot. Too hot, in fact, to eat without risking mild medication and that is my only criticism; too many eateries serve meals that are ridiculously energised. Once it had cooled to edible levels it was just right. My co-sampler was merrily tucking into her risotto and I kept hearing ‘mmmmms’ and  ‘yums’ from her side of the table. 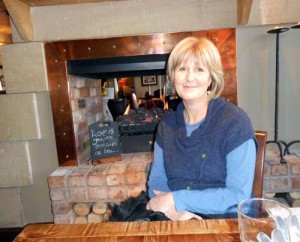 We were flumps, as my daughter used to say when she was full up.

Still, there was room for more. Not for me, however. I know my limitations. No. It was Belgian waffle and ice cream that proved irresistible to my pal – despite my insistence that only one spoon was needed, it was delivered with two. I had to have a mouthful which instantly added three inches to my waistline.

Now, I think it’s pretty unlikely that manager Lou Harris and her merry team need much of a promotional push from me, or anyone else – the fact the restaurant was so busy on a Tuesday afternoon in January shows how popular the place is already – but if you happen to find yourself in Kenilworth and are thinking about going for a meal then I recommend The Green Man.

They’re gearing up for Valentine’s Day, so eschew the Birmingham dining experience and whiz to Kenilworth for a hearty time in a place where you can actually talk to your loved one without shouting.