After breaking records on Broadway and playing to sold out audiences in London’s West End, David Esbjornson’s award-winning production of Driving Miss Daisy is making its way to Coventry’s Belgrade Theatre from Mon 11 to Sat 16 Feb. 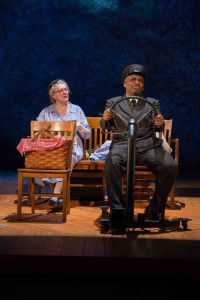 Starring Gwen Taylor and Don Warrington, Driving Miss Daisy is the charming, poignant and compelling tale of the unlikely friendship that blossoms between a prickly, elderly southern matriarch, Daisy Werthan, and her kind-hearted chauffeur, Hoke Colburn.

Alfred Uhry wrote Driving Miss Daisy in 1987 and two years later the play was made into a film with Morgan Freeman and Jessica Tandy.  Alfred Uhry received an Academy award for Best Adapted Screenplay while the film was awarded Best Picture. This production of the play won the 2012 Whatsonstage.com award for Best Play Revival voted for by over 10,000 theatregoers.

The story begins in 1948 when Daisy Werthan, a 72-year-old Jewish widow living in Atlanta, is deemed too old to drive.  Her son Boolie hires Hoke Coleburn, an African American, to serve as her chauffeur.  What begins as a troubled and hostile pairing soon blossoms into a profound, life-altering friendship that transcends all the societal boundaries placed between them.

Gwen Taylor, who plays Daisy Werthan, recently played Anne Foster in Coronation Street.  Other notable TV credits include Peg in Heartbeat, the title role in Barbara, Rita in A Bit of A Do, Margaret in Belonging and Gen in Conjugal Rites.  Her film work includes Monty Python’s Life of Brian and Richard’s Things.

Don Warrington, who plays Hoke Coleburn, is best known for playing Philip Smith in the hit TV series Rising Damp alongside Leonard Rossiter. He also competed in the sixth series of Strictly Come Dancing. Other television credits include Morse, Red Dwarf, Lovejoy, Doctor Who, Casualty, The Crouches, New Street Law and Death in Paradise. His stage credits include A Statement of Regret and The Mysteries for the National Theatre, Elmina’s Kitchen at the Garrick Theatre and The Merchant of Venice at Birmingham Repertory Theatre.

Tickets for Driving Miss Daisy are available now from the Box Office on 024 7655 3055 priced from £15.75 to £30 or via www.belgrade.co.uk where cheaper tickets are available.