With Arctic conditions roaring in, Dave Woodhall wonders whether the city will be prepared. 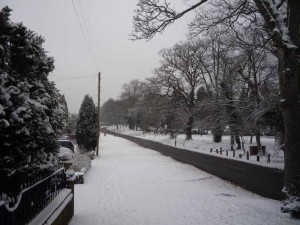 I’m sure it’s not just rose-tinted nostalgia, but there used to be more snow around. Usually a couple of heavy falls every winter, with a real Arctic wipeout every three or four years. We’d moan about how the country grinds to a halt every time there’s an inch of snow but on the whole we managed pretty well. A few schools had the day off, a few trains were late, one or two buses were cancelled but we got on with it. Started out earlier for work, got home a bit later. No real harm done.

Then from the mid-nineties we had a strange period where snow seemed almost as rare a phenomenon as a scorching summer. Whether it was global warming or whatever, winters weren’t the same anymore. Maybe people forgot how to cope with snow, because for the last few years we’ve tended to have one decent fall and when it happens chaos ensues.

In 2009, I wrote in the Stirrer about how Birmingham had basically surrendered to the elements, in the form of a snowfall so light that it barely covered the pavements. Two years later rubbish went uncollected for weeks because of a cold snap that meant snow didn’t melt quickly enough. Last February Andy Munro told us the worrying tale of how he and thousands of others were stranded in the city centre one Saturday evening when public transport was cancelled.

Over the next few days the transport companies, council and everyone else involved in the smooth running of the city have got the opportunity to show how they’ve learned from these mistakes and are ready to cope with whatever the climate can throw at us. They can’t say they weren’t warned –we’ve been told well in advance to expect anything up to 48 hours of snow and the worst winter conditions for over two decades. Birmingham v the elements – let battle commence.