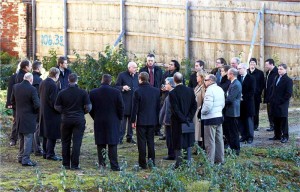 The visit, one of the largest of its kind in Europe, was organised by inward investment programme Business Birmingham in a bid to build on growing levels of foreign investment in the city. It was supported by key partner Salhia, one of Kuwait’s leading real estate development and investment companies, which is working on the £150 million Beorma Quarter scheme in Digbeth.

The delegates, known as site selectors, provide major companies from across the US, China and Europe with recommendations on where to locate and expand their businesses worldwide. The group has worked with a wide range of multinationals such as Dell, HSBC, Citigroup, Pfizer, Morgan Stanley, HP and Cisco.

Chris Steele, President of CWS Consulting Group LLC, has worked on high-profile investment projects including The Boeing Company’s selection of Chicago for its headquarters. He said: “I receive around 20 invitations each year to visit different locations across the globe but will only visit a select few, based on needs we see in the market. We have been aware of Birmingham for some time, and I believe that it has real potential for the companies we work with.”

During the three day tour – which included a wide-ranging programme of site visits and briefings – the site selectors met with 25 of the city’s leading developers, professional services firms and civic leaders to scope out its strengths and investment opportunities. This included an on-site tour of the Beorma site, a major mixed-use scheme comprising more than 600,000 sq ft of offices, leisure and retail space, a hotel and public square.

Salhia representative Keith Williams commented: “The Beorma Quarter is set to revolutionise the city’s burgeoning creative district in Digbeth. The site selectors’ visit offered us an invaluable opportunity to showcase our ambitious development plans to global decision makers who hold the key to attracting more investment into the city.”

The attendees also saw the 468-acre Longbridge regeneration site, which is being developed by St. Modwen and is set to create around 10,000 jobs. Two Snowhill, Fazeley Studios, The Kettleworks, Brindleyplace and University Hospitals Birmingham were among the other locations visited by the delegation. Visitor experiences at Jaguar Land Rover and Edgbaston Stadium provided an insight into two further success stories in the city.

Wouter Schuitemaker, Investment Director at Business Birmingham, added: “Our site selectors tour has been highly successful in showcasing the city’s strengths to a wide range of potential investors. It highlighted how the business community is pulling together to promote the city to an international audience, and the feedback from participants paints a positive picture for future investment.

“It was important for us that the majority of delegates visited from the USA – a key target market for Business Birmingham in 2013 – but also work for clients across the globe.”

The site selectors’ visit was supported by many of Birmingham’s biggest businesses, developers and public sector organisations: