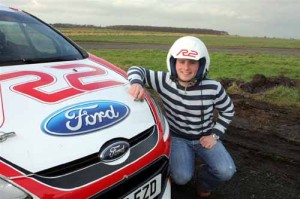 The Motor Sports Association (MSA) has named Jason as the winner of the Renault MSA Young Motor Sport Journalist of the Year 2012. Established in 2002 in association with Renault UK, the prize is designed to recognise the most promising journalists aged 25 or under working within British motor sport.

Jason, aged 25 from Co. Antrim, studied Journalism and Media at the Coventry School of Art and Design from 2006 to 2009. He returned home to join the Coleraine Chronicle after graduating with first class honours.

A keen motor sport enthusiast, Jason’s nomination for the MSA award was supported by Damian Mullan, Jason’s sports editor at the Chronicle, who credited him with significantly increasing the paper’s coverage of rallying over the last two years. Former British Historic Rally Champion Dessie Nutt also praised Jason for helping to raise the profile of motor sport in the region.

Beating off stiff competition from across the UK, Jason impressed the MSA judges with his accomplished news writing, the breadth, depth and originality of his stories, and the sheer amount of copy bearing his by-line. He will be presented with his award at a special ceremony being held in London in January 2013.

Jeremy Townsend, Communications Director of Renault UK, said: “The standard of entries was as high as ever with a very impressive breadth of work. Of all though, Jason’s work stood out with unanimous agreement from the judges. I wish Jason every success with his future career.”

Jason Craig said:  “To win this prestigious accolade is extremely humbling and the culmination of two years hard work with the Chronicle. It is always nice to be recognised by your peers, and no doubt the award will serve as a huge confidence boost with 2013 just around the corner. I look forward to collecting my award at the RAC’s Pall Mall in London at the Night of Champions in January – it promises to be a very memorable occasion.

“I would also like to take this opportunity to pay tribute to the journalism staff at Coventry University – all of them were very supportive during the course of my undergraduate studies. They made me feel most welcome from day one, and I built up a strong rapport with all of them, especially Andrew Noakes, who advised me on how to pursue my passion for motor sport.”

Andrew Noakes, Senior Lecturer in Automotive Journalism at Coventry School of Art and Design, was delighted to hear of Jason’s success in the MSA competition. He said: “On behalf of all of my colleagues within the Department of Media I would like to congratulate Jason on winning the Motor Sports Association’s award. He has done fantastically well to win what is a very highly esteemed prize within industry circles.

“It’s always pleasing to see ‘one of our own’ succeed but knowing Jason as an ambitious, enthusiastic and committed student I was sure that he would go on to do well after leaving us. I share Jason’s passion for all things motor sport so I’m really pleased to see that he took ‘pole position’ in the MSA Competition.

“I like to think that Jason’s success is also testimony to the quality of our journalism and media courses here at Coventry, which are designed to industry standards and where the focus is on readying students for professional advancement through a combination of theoretical study and practical application, access to cutting edge equipment and work-based learning opportunities.”

Jason will collect a trophy and a cheque for £1000 at the Motor Sport Association’s Night of Champions at the Royal Automobile Club, London, on 19 January 2013.