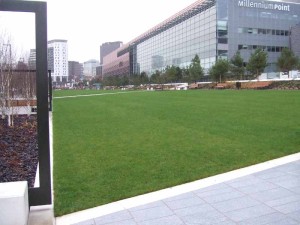 The lawn in front of Millennium Point

It’s rare indeed to find a local authority that is willing to spend a few million on a new city park as Birmingham City Council has done in creating Eastside City Park. But, welcome though it is, how can the council justify the cost when elsewhere Birmingham’s old parks are visibly suffering from funding cutbacks, buildings lay neglected, pools are polluted, and bowling greens and tennis courts are closed from lack of staff?

How can the city manage the ongoing revenue burden with no prospect of a direct cash payback? Hard and soft landscaping needs constant and costly maintenance if it is to survive as its designers intended. There are already signs of wear and tear from skateboarders and the sad fate of the water features in Paradise Circus doesn’t bode well for the survival of the watercourses and fountains beyond the first few years. 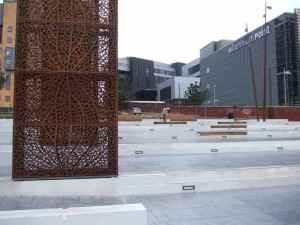 The stepped ‘arena’ next to Millennium Point

Nobody pays to use a public park, except for a special event when a part, like the stepped ‘arena’ next to the west end of Millennium Point, can be closed off to the public. Such events would have to be carefully and expensively managed to avoid the near disaster of the one held near here some years ago. They are unlikely to boost the coffers of the city council with vast profits.

The answer to the question is that in 2011, when the Eastside Master Plan was published by the council, property developers were not in the least interested in building in Eastside. Creating a new park on the former car park in front of Millennium Point was a gesture, a sign of the council’s faith in the future. The council hoped that over the 20-year span of its Master Plan, things would look up. They expect some buildings to arrive between 2010 and 2015 and a few more to arrive between 2015 and 2020.

But between 2020 and 2026 the HS2 rail terminal will arrive thus promising a few more buildings as well as the IKON Museum of Modern Art which will form one side of the performance area mentioned above, re-named ‘Curzon Square’. From 2030 onward, the final pieces of the jigsaw will be fitted in alongside the rail terminal, facing Eastside City Park which by then will have lots of mature silver birch trees.

The Plan assumed that the council would resist future development pressure on the land. That may turn out to be so, but the Master Plan already indicates that the existing green spaces with their mature trees on Park Street – that at present form a ‘green wedge’ to the approach to the new park – will be largely obliterated by HS2 station buildings. By 2026 only the rectangle adjacent to Millennium Point and the University buildings will remain. 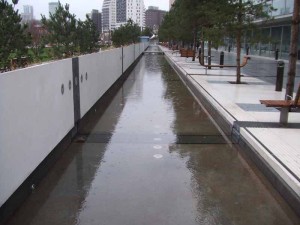 A water feature without the fountains

When they need the money Councillors are easily tempted to sell off bits of publicly-owned parks, playing fields or recreation grounds to any property developer who will make them a good offer. And, when legal encumbrances such as charitable covenants on old parks can, it seems, be cast aside with impunity, there is no guarantee that Eastside City Park will survive intact if the expected development of Eastside does take off.

A few million pounds is not a big gamble for a city whose budget is counted in billions. In any case, by next summer, when 10,000 students throng the BCU Campus, it will serve a useful purpose. And if the gamble doesn’t pay off, we can all agree that creating a new park is a good thing in itself. Enjoy it while you can!