The International School and Community College, East Birmingham, generously donated their entire stock of redundant IT equipment to schools in South Africa this month. 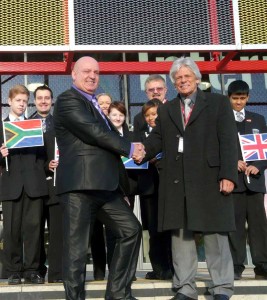 Having recently acquired new IT equipment as part of the ‘Building Schools for The Future’ programme, The International School was left with the decision of what to do with their existing components.

Mick Clune, IT Manager at the school felt it would be worthwhile donating and setting up the equipment in another educational setting. How to go about this was, however, proving to be an issue.

Fortunately for the school ValueMetrics – a Meriden based Business Improvement Consultancy – offered a solution. They were able to provide storage and preparation of  more than a thousand pieces of equipment on-site at its offices in Meriden. Packington Estate also assisted by allowing a vacant unit to be used for additional storage free of charge. ValueMetrics then set out to find a worthy recipient of the equipment.

Gustav Gerber, Project Manager at ValueMetrics, said: “When we found out that The International School needed assistance in storing and preparing the equipment we were more than happy to offer our time and resources to assist in such a worthwhile cause. We, alongside The International School, felt that this equipment would be well received in underprivileged schools in South Africa and so set about locating worthy recipients.”

With extensive links to South Africa, including many of its staff being South African nationals, they identified a number of schools close to the heart of its employees who were in need of such valuable and fundamental resources.

However, the logistics of sending the equipment to South Africa proved more than a little challenging and costly, requiring some extra help.

The company turned to the Solihull based Renewal Christian Centre that recognised the opportunity to positively affect so many students in South Africa and generously provided sponsorship for the project – covering the transport and distribution costs of the IT equipment.

Reverend Pastor Peter Jenkins, Pastor for missions at the Renewal Christian Centre, said: “A project this large needs many people that are willing to give up their time and expense in order to help those less fortunate.

“We would like to thank IMS Freight who kindly donated the shipping at cost, making this whole thing possible, ValueMetrics for approaching us with the idea in the beginning and The International School for providing the equipment.”

As a result of the generosity the IT equipment is now on its way to the schools – with its anticipated arrival just in time for Christmas and ready for use in the New Year.

As part of the donation, The International School hopes that this will be the beginning of long term relations with the South African schools, allowing for a cross-cultural exchange between students as part of its IT and educational development.

Mark Garside, Head Master at The International School, commented: “It has been wonderful to be able to help so many people in South Africa get a better education through the donation of this equipment.

“We often forget how lucky we are in this country to be given new equipment by government programs and it’s great that we have been able to be part of providing schools in South Africa with IT equipment that they dearly need. We hope that this will be the beginning of a long relationship with the various schools and their students.”