Quite apart from being the man who really made the Mini, Birmingham tycoon, Leonard Lord, was, arguably, the most important British industrialist of the latter half of the twentieth century.

In automotive circles his name is recognized as the founding father of The British Motor Corporation and, too often coined, when a scapegoat is needed for many of the ills that eventually destroyed the nation’s motor industry.

Apart from the original Mini he gave the motoring fraternity dozens of BMC Farina models, lorries vans and coaches, the Austin Champ and the Gipsy, the A40 Sports and A90 Atlantic, and cars as diverse as the Austin Healey 100 and the Austin FX3 taxi. Looking beyond Longbridge, he was responsible for the Morris Eight and for saving Morris and MG from ignominious bankruptcy. There is even a case to be argued that he gave the world the chocolate Wagon Wheel!

In the aircraft world Lord was involved with machines that ranged from the Fairey Battle and Hurricane to the Lancaster and Stirling bombers.

A new book by motoring historian, Martyn Nutland, tells, for the first time, the true story of Leonard Lord.

As well as a remarkable work on automobile history, Brick by Brick – The  Biography of the Man Who Really Made the Mini – Leonard Lord, is a unique social and political history brim full of intrigue in high places, the machinations of captains of industry, wartime action, industrial violence, glamorous cars and a tantalizing dose of sexual misdemeanour. 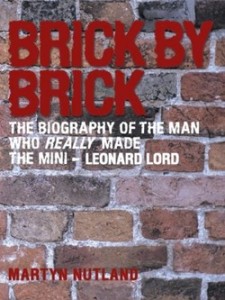 Now out as a soft-cover and e-book from AuthorHouse