Turkish Airlines is going from strength to strength at Birmingham Airport, increasing the number of flights to Istanbul from seven to ten flights a week, offering even more choice and greater connectivity than ever before. 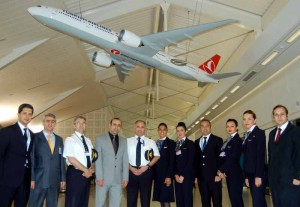 Photo of the model aircraft with flight crew includes Selim Ozturk, General Manager for Turkish Airlines at Birmingham Airport (second in from the left).

To celebrate the expansion, Turkish Airlines has presented the Airport with a giant model aircraft which now hangs proudly from the ceiling of the Airport’s International Pier.

The extra flights on Monday, Thursday and Sunday offer even more opportunity for onward connections to the Middle East, the Far East and Africa, as well as providing greater flexibility for those wanting to travel from Birmingham to Istanbul.

Martyn Lloyd, Commercial Director at Birmingham Airport, said: “Over the last four years, we have seen more and more people flying with Turkish Airlines, so they can connect to over 200 onward destinations via Istanbul Ataturk Airport.

“This increase in the number flights per week is great news for our leisure and business passengers, who now have even more choice and flexibility for long-haul connectivity from Birmingham.”

Selim Ozturk, General Manager for Turkish Airlines at Birmingham, said: “We are extremely proud of what we have achieved at Birmingham Airport since we began operating flights from here back in 2008.

“The demand has been incredibly strong from the very beginning, which is why we have decided to increase the number of flights between Birmingham and Istanbul from seven to ten flights per week.

“To celebrate this landmark occasion, we are delighted to present the airport with an impressive model aircraft, which now hangs from their International Pier for passengers to admire before they fly out.”

For more information about Turkish Airlines and to book flights, visit www.thy.com