A magical children’s theatre production, about the tales of a mischievous frog, takes place at The Public in West Bromwich on Thursday 25 October. 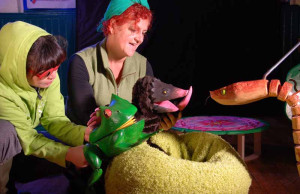 Gregory the Frog is the stubborn, pig-headed bane of his poor mother’s life. Whatever she asks him to do, he does the opposite. He goes to bed when he’s told to get up ─ goes to school at home time ─ when told to stand up, he does, but always on his head. His mother’s at her wit’s end ─ her head’s spinning ─ what has she done to deserve this? Korea’s best-loved folk tale slips from funny to dark, moving to exhilarating, like the very best of the Brothers Grimm.

The show represents a major collaboration across two continents. Two playwrights, one English and one Korean, have worked together to produce two versions of the same story, one in each language, one to be performed in each country. Each company has then sent one of its own actors to appear on the other’s production.

Linda Saunders, Managing Director of The Public said: “Children’s theatre has always proven incredibly popular amongst our audience and The Frog Who Wouldn’t Hop promises to be equally as popular.  This half-term The Public will be buzzing with activity with something for the whole family to enjoy, from stunning children’s theatre to a drama workshop, Halloween activities to cultural celebrations.”