Following its recent successes, 20th Century Boy and Fragile, Coventry’s Belgrade Theatre is staging a brand new production of William Inge’s classic family drama The Dark at the top of Stairs in the B2 auditorium from Sat 20 Oct to Sat 10 Nov. 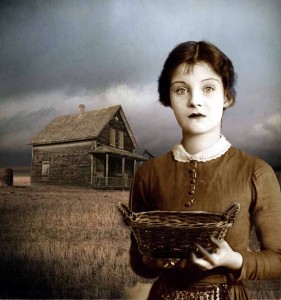 Set in Oklahoma in the early 1920s, The Dark at the top of the Stairs follows the trials and tribulations of the Flood family as they are each forced to face their fears and accept that the world as they know it is changing forever.

Writer William Inge dedicated the play to his friend, rival and contemporary Tennessee Williams. It went on to win the Tony Award for Best Play in 1957 and was made into a successful film in 1960 with Angela Lansbury. It has not been seen in England for over a generation.

During her time at the theatre she was a member of the Belgrade’s groundbreaking, work-related learning programme Acting Out and the Senior Youth Theatre, where she performed in numerous productions including Cat and Mouse and Diablo. She went on to win a part in the chorus of the Belgrade’s pantomime, Mother Goose in 2000, which was directed by Bob Eaton and starred BBC radio presenter Malcolm Boyden as Dame.

Having well and truly caught the acting bug, she made the move to London where she trained professionally for three years at the Courtyard Theatre. Since graduating last year she has worked on numerous television commercials and music videos and has even toured Italy playing Maid Marian in Robin vs Sheriff.

Jenny-May said: “Growing up as an aspiring actress in Coventry, the Belgrade was always a huge part of my life. I’m thrilled to land this role in The Dark at the Top of the Stairs, and to be performing it at the Belgrade is the icing on the cake. It feels like I have returned to my roots; to the place that first inspired me to want to act over a decade ago.”

Benjamin Durber was also a member of the Belgrade’s Senior Youth Theatre and later the Young Company, where he appeared in Spring Awakening.

Joining them onstage is Andrew Whipp who will play travelling salesman and man of the house, Rubin and Caroline Faber, who will play his wife Cora. The cast also includes Olivia Vinall as their shy daughter Reenie, Philip Labey as their young, Hollywood obsessed son Sonny, Jessica Martin as Cora’s sister Lottie, Graham Vanas as her husband Morris, Asher Amis as Sammy and Jenny-May Darcy as Flirt.

Tickets for The Dark at the top of the Stairs are available now from the box office on 024 7655 3055 priced from £8.50 to £20 or via www.belgrade.co.uk where cheaper tickets are available.