A Coventry-based manufacturer has played a crucial role in creating a secure and safe environment for one of the world’s greatest sporting events. 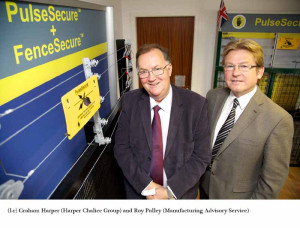 Harper Chalice Group Limited, which has been assisted by the Manufacturing Advisory Service (MAS), was chosen to supply its FenceSecure and PulseSecure electrified perimeter intrusion detection and deterrent products to the London 2012 Olympics.

The systems provided the first line of defence against any security threats/break-ins during the actual construction and then continued to protect the 15,000 athletes and four million visitors that attended.

They were used throughout the entire duration of the two events and will remain in place now to secure the site during post-games activity.

Graham Harper, Managing Director of the Harper Chalice Group, was delighted to be involved: “This is a fantastic contract for us to be involved with and will provide a lasting legacy for our business that we will look to exploit going forward.

“We had to compete against domestic and international rivals to secure the orders, with both our FenceSecure and PulseSecure systems installed for independent trialling along with those from other major competitors.

“Needless to say we came out with the best results for both systems and this translated into ‘no reported breaches’ during the construction and the actual event itself.”

He continued: “The total value of these contracts was in excess of £2m and has enabled us to increase our workforce from 12 to 18. It has also given us a tremendous endorsement that is already starting to pay dividends with renewed interest from home and abroad.”

The sporting deal has been a real Midlands engineering affair, with Harper Chalice Group working with eight of its local supply chain and Wolverhampton-based Zaun Ltd, the latter supplying and installing the host security fences and gates.

Using its approved PulseSecure and FenceSecure systems, the company supplied and commissioned nearly 900 detection zones to ensure secure perimeters and that any attempt to breach them would be reported immediately.

“We wanted to fly the flag for manufacturing in the Midlands and this has brought many tangible benefits, including being able to respond quickly to changes in requirement and specification,” continued Graham.

“It also meant we could channel some of the investment into creating new jobs both at our business and in the local supply chain.”

Established in 1998, the Harper Chalice Group will continue to invest in the research and development of its products to add to its existing range of industry leading perimeter intrusion detection and deterrent systems.

The company has been supported by the Manufacturing Advisory Service with mentoring, help with process improvements and financial assistance towards problem solving and product development.

Graham continued: “We are indebted to MAS for their assistance, from help with vendor selection in our early stages to providing vital technical assistance when we needed it most.  The support body has helped us every step of the way on our journey to meet the growing demand for the reliable protection of people, property and assets worldwide.”

The Manufacturing Advisory Service’s Roy Pulley added his support: “We’ve seen first hand how the Harper Chalice Group has evolved into a truly world leader and I’m delighted that Midlands engineering expertise and electronics knowledge has come to the fore to keep this Summer’s biggest sporting event safe.”

He concluded: “In addition, the firm’s perimeter fences have protected a host of other high profile venues, including military establishments, government assets, nuclear installations and even Royal Palaces.

“It is now seeing its work go overseas, with 45 accredited dealers in place across the world from Scandinavia to The Middle East, from India to Hong Kong and the Far East.”

MAS, which is funded by the Department for Business, Innovation and Skills (BIS), works for manufacturers and through experienced advisors can help shape strategy, create new products, reduce waste and review supply chains.