The UK’s only American election YouTube Sensation has finally broken his silence and released a book about his adventure in 2008. 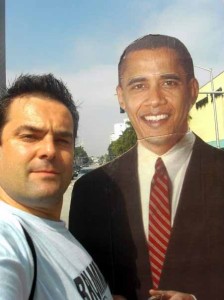 Adam Smith, also known as Steve Zacharanda, hit the headlines after his drunken rant on the night Barack Obama became President made millions of people laugh across the world.

Obama and Me: The Incredible True Story of a YouTube Sensation is the hilarious story of how a penniless Brummie followed his dreams by helping Barack Obama into the White House and gives a fascinating insight into the most inclusive political campaign ever.

For the first time ever Zacharanda tells all about his infamous video in which he will always be known for.

Caught on camera by Dutch Emmy nominated documentary maker Maartje Nevejan slumped on the floor sending copy back to the Birmingham Mail, drunk on rum and the joy of helping change the world Zacharanda’s three minutes made him a late entrant into the YouTube Sensation of the American Election and became the ‘and finally’ story of the election.

His video amassed 400,000 views in three days and he instantly became the most written about journalist in Britain.

Dividing opinion between those who thought he dragged the good name of British journalism through the mud and those who thought it was inspirational for giving one in the eye for the companies sacking countless journalists across Britain.

Whether it is being called a ‘n****r-loving baby killer’ on the streets of Miami by Republicans or entertaining voters with the Jewish Elvis – Jelvis – the book is being called the ‘funniest book about politics since Fear and Loathing on the Campaign Trail’.

And it is all told with a self-deprecating style which will make readers laugh, cry and wince with embarrassment.

Adam said: “I was derided and lauded and I read so many untrue things about me, which I found hilarious, but I think it is now the time to tell my side of the story.”

“There is a danger I am going to get sued but anybody who knows me knows I have no assets so if anyone can get money out of me then I’ll shake them by the hand because they must be a magician.”

He added: “I wanted to describe being in the middle of a media storm from the eye of the storm. “I had journalists from across the world pursuing me for quotes and more videos and of course I had my bosses back at home who I had to face when I returned.

“Everyone has done something on a night out and had that nagging feeling about what has happened the day after, well by the time I woke up I was already on the way to being a YouTube Sensation, whether I liked it or not.”

He added: “It didn’t take long for everything to fall apart when I returned from Miami, I lost Cheekie Media, the PR business I set up, my magazine Goggle-eye and the woman I was planning to marry in a matter of weeks in 2009, but against all the odds I became a local hard news journalist again.” 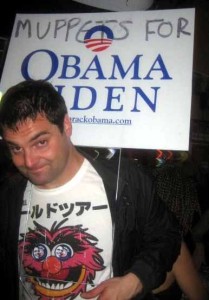 For the last three years Adam has worked at the Halesowen News as a hard news reporter after fearing he would never be let near a newsroom again and now presents The Steve Zacharanda Radio Show every week on Scratchradio.co.uk every Thursday at 8pm.

He said: “As well as trying to keep the powers at be to account in my patch I now do fair bit of travel writing and have been all over the world in the last few years but now, well I’m planning my trip back to America to try and help my mate Barry to stay in power.”

For more information, a free excerpt to download and to buy Obama and Me: The Incredible True Story of a YouTube Sensation for as little as £3.99 visit www.stevezacharanda.com, the book is available on Amazon, Kindle and other outlets.

To see what all the fuss was about and see the video that made him a YouTube Sensation look below:-