A Solihull schoolboy is flying high after winning a competition designed to increase awareness about Birmingham Airport’s runway extension. 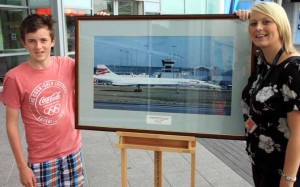 13-year-old Freddie Cutts is now the proud owner of an exclusive framed photograph of Concorde visiting Birmingham on its farewell tour in 2003, after the Airport launched a competition inviting local people to guess the correct length of the runway extension.

With preliminary work on the runway already started, staff from Birmingham Airport launched the competition to help raise awareness about the new development amongst the local community.

The competition ran over a summer-long campaign, as the team attended a series of community events including the Catherine de Barnes Fete, Sheldon Country Fayre and the ‘Fun in the Park’ event in Solihull’s Tudor Grange Park.

Freddie, who guessed correctly with 405 metres, recently visited the Airport to collect his prize. He said: “Because I live close to the Airport, I’m always interested in what’s going on.

“I was looking at the plans on the Airport’s website only a few days before the Catherine de Barnes Fete and so when I saw the competition I couldn’t believe it. I knew what the answer was straight away!”

Kirstin Kane, Environment Manager at Birmingham Airport, said: “We’re thrilled that Freddie has won this fantastic prize. It’s great to see him take such an active interest in the Airport, he obviously did his homework the night before!

“Attending these events provides a great opportunity to meet local residents, hear their views and keep them updated on what is happening at the Airport.”

Kirstin added: “Extending the runway represents an exciting time of growth for Birmingham Airport. We are committed to ensuring that everyone is kept fully informed about this major new development.”

The Airport’s runway extension will be complete in spring 2014, allowing larger aircraft to fly further to new destinations such as Beijing, Bangkok, Los Angeles, Las Vegas and Johannesburg.