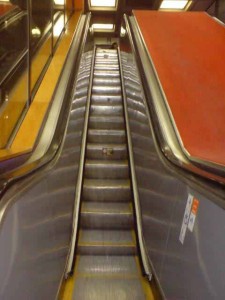 The latest news for long-suffering users of the Central Library, is that the Music Department is closed on Saturdays and that nothing will be done about escalators that have stopped working.

We have come to expect this sort of thing and the feeble official explanations that never quite ring true. A flier dated September 2012 explains that changes to opening hours are ‘essential to enable staff to get ready for the Library of Birmingham opening in September 2013’. I was told by a member of the front line staff that ‘normal’ services should be resumed on the day the new library is opened, although front line staff don’t know if they will have a job under the new regime.

I received a report from a supporter of Friends of the Library who had just visited the building. I think it’s worth quoting.

‘I was in the Library on Friday and most of the escalators were stopped, and notices were up stating that they were no longer in use because they were obsolescent – spare parts can’t be obtained and they can no longer be maintained – so please use the lift or take a chance on scaling the irregular steps. This puzzled me as, even from my limited experience of escalators in my murky professional life, there’s no such thing as an escalator (or a lift for that matter) that can’t be maintained.’

‘So I did a bit of research. The escalators were installed originally by The Express Lift Company (ELC), Northampton, which is now defunct. ELC was taken over by Otis (which is far from defunct – and has, in fact, the contract for the new library). So I contacted Otis (Midlands and East Anglia) and spoke to Sean Barlow, their highly experienced escalator specialist. I told him about the current state of the Central Library’s escalators and the notices explaining why they’re no longer functioning. He was perplexed. To his knowledge, Otis has not been approached to service / maintain the escalators; so he assumes that BCC has a contract with another company. He was doubly perplexed by the reasons given for the escalators no longer working as the universal solution for parts no longer readily available (i.e., which are “obsolete”) is to have them made! It’s really not rocket science. As he said, ALL escalators are a bit like Meccano – made up of elements sourced from any number of suppliers and manufacturers – and the only criterion for whether a spare part is available or not is cost. There’s no such thing as an irreplaceable replacement part, as all parts can be made to order.

‘So, it looks to me like BCC has decided that it’s not worth spending money on keeping Central Library working as they’re going to be demolishing it shortly anyway. In the meantime, BCC is more than happy to render the  library less usable to the public and to put up notices that are less than truthful. Of course, non-working escalators will only add to BCC’s propaganda successes with the general public that the Central Library is past its sell-by date (and no longer fit-for-purpose) and needs to be pulled down.’

The public know that once a building is condemned its owner will spend as little as possible on it, but it’s now 12 years since the Council condemned the Central Library to a slow death by withdrawing long-term maintenance and repair to the building. The Sinking Fund of £1.8 million that was meant for maintaining the building has long since been spent on hiring expensive consultants to plan the new library instead.

My correspondent concludes: ‘A little voice inside me is saying that, by rendering the Central Library less accessible, BCC is failing in its duty. A bigger voice is saying that BCC is deliberately down-grading the quality of a service to prove a point. They’ll probably be turning the heating and lighting off next!’