Birmingham Airport (UK) and Chicago O’Hare International Airport (USA) have become Sister Airports to formalise a working relationship and commit to the development of new opportunities; particularly the reinstatement of direct flights between the two cities. 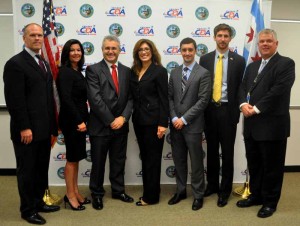 At a meeting held in Chicago yesterday members of the executive management teams from Birmingham Airport and the Chicago Department of Aviation – operator of Chicago O’Hare International – signed a Memorandum of Understanding (MOU), agreeing to work collaboratively in order to strengthen trade, tourism and cultural links between the two cities.

Speaking at O’Hare International during the MOU signing, Paul Kehoe, Birmingham Airport’s CEO, said: “Birmingham enjoys a special relationship with Chicago as the two cities have been twinned since 1993. Over 350 North American companies, including Microsoft, Motorola and Kraft Foods – which is headquartered in Chicago – provide employment for 60,000 people in the area. This formal partnership will show industry that we’re committed to strengthening links further and pushing for the reinstatement of direct flights between the two cities, which ceased to operate 11 years ago in the wake of 9/11.”

Chicago Department of Aviation Commissioner Rosemarie S. Andolino, added: “On behalf of Chicago Mayor Rahm Emanuel, the City of Chicago and the Chicago Department of Aviation, we are very pleased to establish this new partnership with Birmingham Airport. This signing reflects our genuine intent to work together, maintain an effective working relationship and develop mutually advantageous opportunities to benefit both airports as well as the cities of Birmingham and Chicago. Through promotion, we will enhance business, commerce, trade, tourism and cultural relations between the two cities, and share information and best practices relating to operations, construction, planning, customer service and cost management.”

Both airports have capital improvement programmes underway, including a 400m runway extension scheme at Birmingham Airport to allow aircraft to carry more fuel and fly further, and a multi-billion dollar modernization program at O’Hare International to reconfigure its intersecting runways into a modern parallel layout.

Birmingham Airport currently handles nine million passengers annually, recent infrastructure development means that it can accommodate up to 18m passengers year. With the runway extension, this potential increases to 36m by 2030. Its spare capacity and location just an hour from central London, means that Birmingham is set to become an increasingly important resource in the UK to help ease congestion at London Airports.