In the second of three articles about the ‘invisible middle’, Steve Beauchampé considers Birmingham’s involvement (or otherwise) in ‘the Great British summer’.

The Queen visited Birmingham last week as part of her national Diamond Jubilee tour. Blink and you missed her; she spent around 25 minutes at the Council House, Town Hall and in Victoria Square, opened the new Q.E. Hospital in Selly Oak and then left to visit a museum in Cosford for the most high profile part of her day, involving a pageant of several thousand schoolchildren. The Birmingham leg of the visit received no national media coverage, although the local news did generally sterling work. And that was that; the show moved on to the next town, the next curtseying kids and the next posy of flowers. 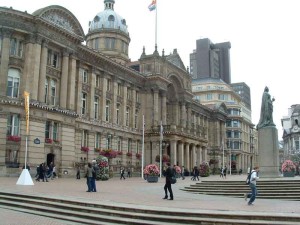 2012 has been billed as ‘the great British summer’, as the country not only celebrates the Royal Jubilee, with all of its attendant glitz and pomp, but, most significantly, also hosts both the Olympics and Paralympics.

Despite being Britain’s second largest city, and the ‘capital’ of a region of over 5m people, Birmingham is seeing none of this. For the Jubilee, there were a few stalls in Victoria Square, some community events in Cannon Hill Park, but nothing that registered on a national scale. Instead, the ‘state’ has made damned sure that the big events all happen in London, as they always have and seemingly always will. There is no country in Western Europe, or quite possibly in entire the ‘developed’ world, where power and great national occasions are so concentrated in one city. 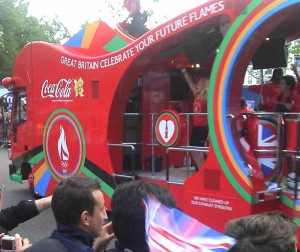 As for the Olympics, sure, we had the torch relay, I even got up very early on a Sunday morning to watch it pass by the top of my road. It was good fun, but in essence it was just a man carrying a torch preceded by an army of support and sponsor vehicles. And after all, there isn’t a town or city of note in Britain that the torch isn’t visiting. It’s also good that the US and Jamaican track and field teams are currently training in Birmingham ahead of the Games. Around 3,000 schoolchildren have been attending the US team’s training sessions at Alexander Stadium, with some athletes signing autographs and posing for the cameras with the youngsters. Meanwhile a few lucky students even chanced upon ‘Lightning’ Bolt himself walking to the Munrow Sports Centre at the University of Birmingham, where the Jamaicans are based. But there are hundreds of sports teams training at venues around Britain ahead of the Games, so it would be surprising if some of them weren’t based in Birmingham, although we can at least boast that we secured two of the very best.

Of course, Birmingham scored a spectacular own goal regarding the Games themselves, when Aston Villa refused to guarantee their stadium would be available to host matches in the Olympic football tournament. This really was unforgivable, Villa claiming that should England secure the right to host the 2018 World Cup (which they didn’t even come close to doing!) they might be redeveloping their ground in 2012 (what, six years before the finals!!!). As a result, eight days (and twelve matches) worth of Olympic Football are about to be staged in Coventry, and as kudos goes – as global publicity goes – it really doesn’t get any better than being able to claim that yours is an Olympic city…a fact Coventry will be dining out on for years! OK, the matches may not sell out, but a rather big spotlight will still be shone on the city, and don’t doubt for a second that Birmingham won’t be envious, even more so given that Manchester too is hosting bona-fide Olympic fixtures.

But while Birmingham’s invisibility and absence from the national stage during the ‘great British summer’ is partially self-inflicted, mostly it results from our living in a country where those holding the reigns of power are wholly unwilling to relinquish them. From our systems of governance, to our national celebrations and commemorations, such people can’t and won’t see beyond London. To them, to quote Queen Victoria, Birmingham is still not a place to promise much, so they don’t give it a chance.