Ikon presents And Europe Will Be Stunned (2007-2011), the film trilogy by Israeli artist Yael Bartana. 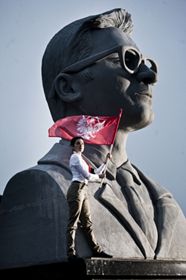 Centred on the activities of The Jewish Renaissance Movement in Poland (JRMiP), a political group founded by the artist who call for the return of 3,300,000 Jews to the land of their forefathers, the films traverse a landscape scarred by the histories of competing nationalisms and militarisms. Collectively they address narratives of the Israeli settlement movement, Zionist dreams, antisemitism, the Holocaust and the Palestinian right of return.

Mary Koszmary (Nightmares) (2007), the first film in the trilogy, began Bartana’s exploration of a complicated set of social and political relationships among Jews, Poles and other Europeans in the age of globalisation.  A young activist played by Sławomir Sierakowski (founder and Editor-in-Chief of Krytyka Polityczna magazine), delivers a speech in the abandoned National Stadium in Warsaw in which he urges three million Jews to return home to Poland. Using the structure and sensibility of Leni Riefenstahl’s World War Two propaganda film Triumph of the Will (1935), Mary Koszmary addresses contemporary antisemitism and xenophobia in Poland, the longing for the Jewish past among liberal Polish intellectuals and the Zionist dream of return to Israel.

The second film in the trilogy, Mur i Wieża (Wall and Tower) (2009), follows the modern day erection in Palestine of a kibbutz, built in the architectural style of the 1930s. The film invokes the mythical heroic images of strong and beautiful men and women who established Israel. These early settlers were portrayed as determined pioneers who, despite the most unfavourable conditions, built houses, cultivated land, studied, collectively raised children, shared assets and were constantly prepared to fight off potential enemy attacks. This is the world that the artist proposes to resurrect in the 21st century, in an entirely different political and geographical configuration.

In the third and final film, Zamach (Assassination) (2011), the dream of a multinational community and a brand new Polish society is put to the ultimate test. Set in the near future, it traces the funeral ceremony of the leader of the JRMiP, killed by an unidentified assassin. The death becomes symbolic, consolidating the new political movement and allowing it to become a concrete project to be implemented in Poland, Europe or the Middle East in the years to come.

Of her work Bartana has said, “This is a very universal story; as in previous works, I have treated Israel as a sort of social laboratory, always looking at it from the outside. These are mechanisms and situations which can be observed anywhere in the world. My recent works are not just stories about two nations – Poles and Jews. This is a universal presentation of the impossibility of living together”.

Yael Bartana was born in 1970 in Kfar Yakezkel, Israel. She lives and works between Tel Aviv and Berlin. Her artistic practice includes film, photography, video and sound installation. In 2011 Bartana exhibited in the Polish Pavilion at the Venice Biennale (the first time a non-national has represented Poland), where she premiered And Europe Will Be Stunned. The trilogy has subsequently been exhibited at the Louisiana Museum of Modern Art, Denmark (2012), Van Abbemuseum, Eindhoven (2012), Art Gallery of Ontario (2012) and the Australian Centre for Contemporary Art (2011). Major solo exhibitions of her work have been presented at Moderna Museet, Malmö (2010), the Museum of Modern Art in Warsaw (2009), PS1, New York (2008), the Center for Contemporary Art, Tel Aviv (2008) and Kunstverein, Hamburg (2007). Bartana is the recipient of several prestigious awards include Artes Mundi 4 (Wales, 2010) and the Anselm Kiefer Prize (2003).

This exhibition is organised in partnership with Artangel. It is supported by the Adam Mickiewicz Institute.